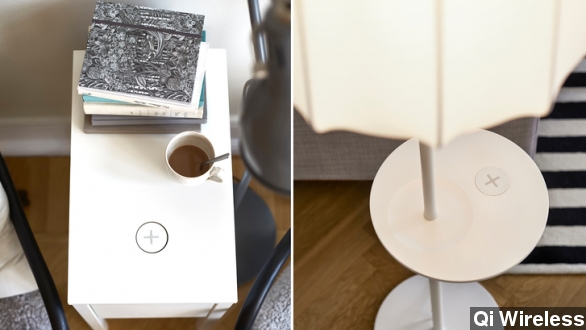 SMS
Ikea Joins War Over Wireless Charging
By Jamal Andress
By Jamal Andress
March 2, 2015
By offering furniture that charges phones, Ikea has involved itself in the battle for wireless-charging supremacy.
SHOW TRANSCRIPT

The Mobile World Congress kicked off Sunday with a slew of announcements and exhibitions from tech companies like Samsung, HTC and more. But an announcement from Swedish furniture giant Ikea is also grabbing headlines.

Just in case charging your phone with a cord is too much trouble, Ikea is introducing lamps, bedside tables and other furniture pieces that will charge your phone wirelessly.

The uber-convenient and mostly unnecessary charging furniture comes from Ikea, but it's designed by the Wireless Power Consortium using a technology standard called Qi Wireless.

Qi Wireless works with many different Android devices, including the new Samsung devices introduced this weekend and older generations of HTC and Microsoft smartphones.

But if you're one of Apple's loyal disciples, the Qi Wireless tech won't work with any Apple product of any generation – unless you buy a separate Qi Wireless case. (Video via Apple)

This problem with compatibility is fueling a larger battle for wireless-charging supremacy. And while that might sound a bit dramatic, there is a battle of sorts to be the worldwide standard.

While Qi and the Wireless Power Consortium have struck this deal with Ikea, the Power Matters Alliance – Qi's wireless charging competitor – will be rolling out wireless charging stations at Starbucks cafes all across the U.S. in the coming months.

Meanwhile, Qi Wireless tech will be making its way into 50 McDonald's locations across the U.K. with Aircharge, a tech company that's aligned itself with the Wireless Power Consortium.

As Digital Trends points out, "Wireless charging protocols have struggled to gain widespread adoption, partly because no one can decide on one standard to stick to."

The Ikea furniture outfitted with Qi Wireless tech is expected to hit North America and Europe in April of this year.