If Dinosaurs Had Telescopes, Saturn Would've Looked A Lot Different 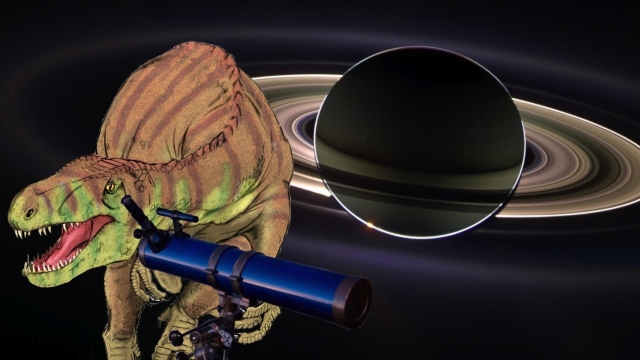 SMS
If Dinosaurs Had Telescopes, Saturn Would've Looked A Lot Different
By Ethan Weston
By Ethan Weston
March 26, 2016
Saturn's inner moons and famous rings might actually be younger than the dinosaurs, according to a new study.
SHOW TRANSCRIPT

With its 62 moons and its famous rings, Saturn is one of the busiest planets in our solar system. And a new study in The Astrophysical Journal suggests a lot of those satellites could actually be younger than the dinosaurs.

The scientists behind the study looked at data collected by the Cassini spacecraft, which started orbiting Saturn in 2004, and found something odd about the orbits of the inner moons.

If Saturn's inner moons were as old as most people thought, their orbits didn't reflect it. They hadn't moved out far enough or synced up with their fellow satellites like you'd expect of moons that were billions of years old. Instead, they'd be closer to 100 million years old.

As a moon orbits around a planet, its gravity pulls on that planet, slowing its rotation slightly, which causes the moon to move away from the planet. This even happens with our moon.

But, unlike Earth, when a planet has a lot of moons orbiting it at once, those moons will sync up in what's called an orbital resonance. This shows how many orbits a satellite makes compared to another: For every orbit, another moon farther out might make exactly two.

Researchers think Saturn's famous rings are also a pretty recent addition and may be the result of a cosmic collision between older satellites. That's probably what formed these newer moons, making the rings and these younger moons the same age.