If Brazil Votes To Remove Rousseff, Her Replacement May Not Be Better 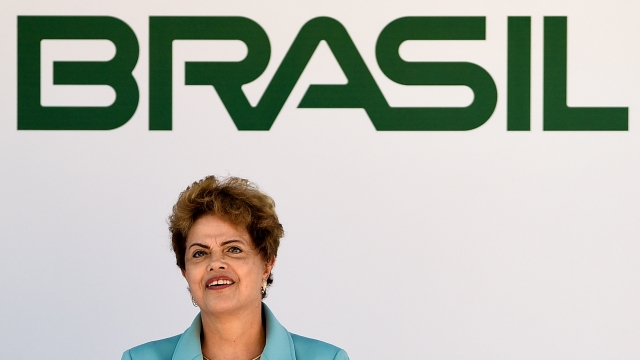 SMS
If Brazil Votes To Remove Rousseff, Her Replacement May Not Be Better
By Grant Suneson
By Grant Suneson
April 12, 2016
A committee voted to impeach President Dilma Rousseff over financial mismanagement allegations, but much of Brazil's government is corrupt.
SHOW TRANSCRIPT

Brazil’s Congress moved one step closer to removing its president.

A 65-member committee recommended the impeachment of Brazilian President Dilma Rousseff for allegedly using funds from a state-run bank to cover up for a lacking budget.

Opponents say it was wrong for Rousseff to mislead the public, but members of her Workers’ Party think it’s just a convenient excuse to get her out of office.

Thanks to plummeting oil costs, Brazil is in the midst of its worst recession in over 100 years and citizens are holding Rousseff responsible. She has a 10 percent approval rating and over 60 percent of Brazilians want her out of office.

It could be difficult to actually make that happen, though. Removal from office requires a two-thirds majority from the lower chamber of Congress and from the Senate. Rousseff can also appeal any part of her trial at any time.

But even if Rousseff is removed, her replacement probably won’t be much better. The New York Times said, "Ms. Rousseff is rare among major political figures in Brazil in that she has not faced accusations of illicit personal enrichment."

Brazil's government has a history of corruption. But the latest scandal is thought to be the largest in the history of democracy. Dozens of Brazilian legislators are accused of bribery and corruption relating to the country's state oil company, Petrobras.

Petrobras allegedly overcharged the government on construction contracts, then split the profits between legislators and company executives. It's estimated between $5 billion and $8 billion illicitly changed hands.

Rousseff would be suspended while senatorial proceedings take place. Her replacement would be political opponent and Vice President Michel Temer. But he's also facing impeachment on the same charges as Rousseff.

Next in line would be congressional Speaker Eduardo Cunha, who spearheaded the effort to get Rousseff out of office. He and most members of the impeachment committee are also charged with bribery and other crimes.

With all the political turmoil, police are gearing up for massive protests in the capital city of Brasilia during the lower house’s vote over this coming weekend.

This video includes clips from The Wall Street Journal, CCTV, CNN, BBC, TeleSur, TV NBR and The Guardian and images from Getty Images.