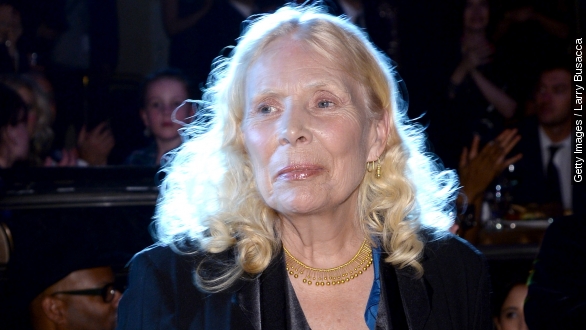 SMS
Iconic Singer Joni Mitchell Hospitalized In Los Angeles
By Jay Strubberg
By Jay Strubberg
March 31, 2015
TMZ reports the 71-year-old musician was taken to the hospital after sources say officials responded to a 911 call for an unconscious female.
SHOW TRANSCRIPT

TMZ reports the 71-year-old musician was taken to the hospital after sources say officials responded to a 911 call for an unconscious female.

The outlet says she was then immediately rushed to an area hospital and was in intensive care as of late Tuesday night. (Video via The National)

Later, Mitchell's official Twitter account confirmed she was hospitalized and that she was "awake and in good spirits."

Variety reports Mitchell previously confessed she's been a life-long smoker and said, "six decades of smoking have robbed me of my voice."

Last year, the singer-songwriter also published a revealing memoir in which she opened up about her struggles battling polio as a child, along with a fight against a rare condition where sufferers believe their skin is irritated by things like insects and parasites.

The Canadian-born folk music icon is known for hits like "Woodstock" and "Big Yellow Taxi," which earned her wide-spread fame in the 1970s. She went on to win eight Grammys throughout her illustrious career. (Video via BBC)