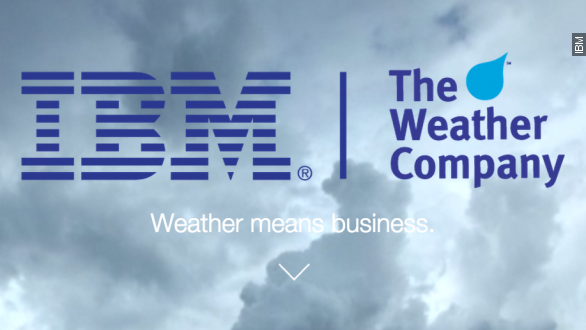 SMS
IBM Promises Millions For Businesses With ... Weather Data?
By Jamal Andress
By Jamal Andress
March 31, 2015
IBM announced Tuesday a partnership with The Weather Co. and a $3 billion investment for its Internet of Things unit.
SHOW TRANSCRIPT

"The Internet of Things is changing our world. ... Interconnecting things coming together at scale in real time."

IBM is the latest big business to invest serious dollars in the Internet of Things. Tuesday, IBM announced it would be investing $3 billion over four years to help create and fund an Internet of Things unit under the IBM umbrella. This is the same group behind IBM's Smarter Planet and Smarter Cities initiative.

The Internet of things can be described as a growing network of objects or things that, well, connect to the Internet. Everything from your TV to your refrigerator to your thermostat would ideally talk with one another in a network of interconnected smart-devices. (Video via Telit Wireless Solutions)

"Now, The Weather Company and IBM are partnering to help businesses take advantage of weather's ups and downs."

As a part of this Internet of Things master plan, IBM announced Tuesday a partnership with The Weather Co., which will provide the key ingredient for IBM's Internet-connected future — data. WSI, the Weather Company's data division, will combine the information it gathers from thousands of weather sensors around the world with IBM's analytics and cloud services to hopefully help businesses "take action at a local level."

IBM claims this enhanced weather data can both save and make businesses millions of dollars by helping insurers alert their customers about severe weather or giving retailers enough notice so they don't run out of products before the big storm, among other things.

Weather Company President David Kenny said of the deal, "This is a watershed moment for businesses that have long been impacted by weather but haven't had the rich data or enhanced decision-making ability to drive positive business outcomes."

This new partnership with The Weather Company follows another partnership with social media giant Twitter. Twitter's collaboration with IBM is supposed to help businesses keep a hand to the pulse of pubic sentiment, predict trends, track opinion, etc. (Video via IBM)

According to Fortune, businesses should expect more deals like these: "Relationships like the Weather Company alliance and IBM's deal with Twitter could become a key differentiator for cloud services providers in the months ahead. ... Expect more of the same from Google, Microsoft, and Amazon Web Services."