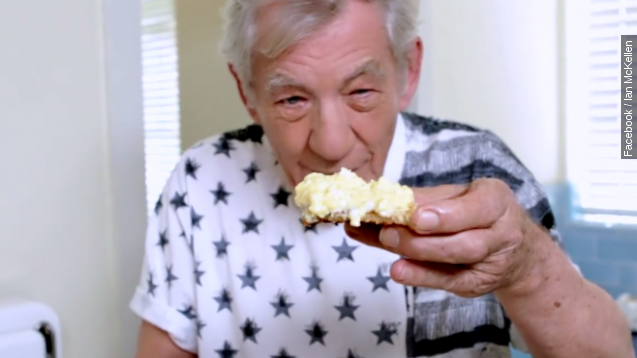 Did you ever imagine Gandalf could teach you how to make eggs? (Video via New Line Cinema / "The Lord of the Rings: The Return of the King")

Thanks, Ian McKellen. This is quite possibly the most eloquent cooking lesson we've ever gotten.

"I think the more you stir, the creamier the eggs are going to be," he explains.

The Facebook video is part of a promotional campaign for his movie, "Mr. Holmes," which is already in theaters. McKellen plays a retired Sherlock Holmes who works on his final case with help from his housekeeper's son. (Video via Roadside Attractions / "Mr. Holmes")

The movie hasn't made a major splash at the box office, but McKellen's critically acclaimed performance is stirring up some Oscar buzz.

It's certainly a major jump from the fantasy world of "Lord of the Rings," but McKellen seems to have settled in well with a cigar and top hat. (Video via Roadside Attractions / "Mr. Holmes")