Haiti Is In Dire Need Of Food After Hurricane Matthew's Destruction 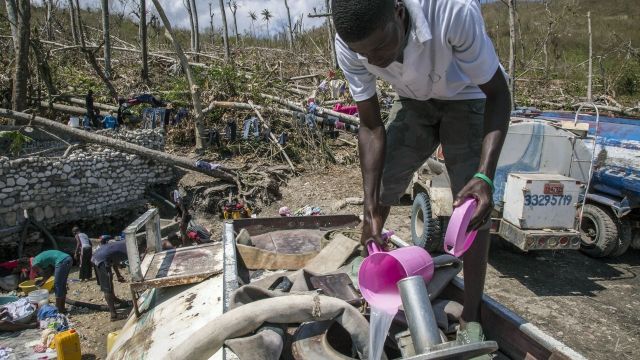 SMS
Haiti Is In Dire Need Of Food After Hurricane Matthew's Destruction
By Katherine Biek
By Katherine Biek
October 25, 2016
The Haitian government says 1.4 million residents need help getting food, and more than half of them are in dire need.
SHOW TRANSCRIPT

More than a million people in Haiti are in need of food assistance three weeks after the country was hit by Hurricane Matthew.

The government of Haiti and multiple aid groups estimate about 1.4 million residents need help getting food, and more than half of them are in dire need.

The devastation wasn't limited to one area. In the country's western tip, over half of the livestock was lost. On the southern coast, residents can't fish because their boats were washed away in the flooding. In the northwest, as much as 90 percent of the crops were destroyed.

About $360 million worth of crops were lost in the hurricane.

SEE MORE: Haiti Wants Help After Hurricane Matthew — But Not From This Group

Haiti had already been dealing with a food crisis for the past couple of years because of a drought. But prior to Hurricane Matthew, it had been improving.

Now, the U.S. Agency for International Development has pledged almost $28 million in humanitarian assistance to Haiti, Jamaica and the Bahamas.

But the Haitian government and aid groups say at least $56 million is needed to help all the hungry people.