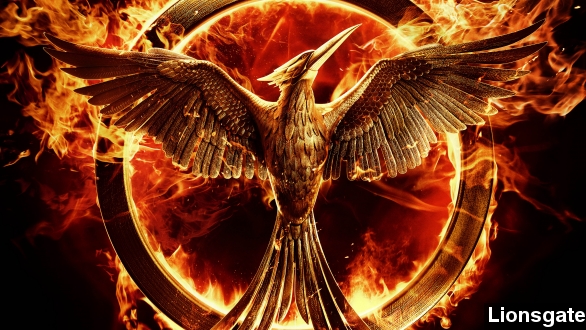 SMS
'Hunger Games' World Expands To The Stage
By Madison Conklin
By Madison Conklin
November 7, 2014
Lionsgate films announced the characters from Panem will be hitting the stage in an adaptation for a live audience.
SHOW TRANSCRIPT

Lionsgate has volunteered one of its biggest blockbusters as tribute to take the stage.

Lionsgate announced Friday it's bringing the big-screen version of the "Hunger Games" franchise to a live audience.

Think Broadway! Dancing, singing, bright lights and music, but not as happy-go-lucky.

The stage production will come to life in 2016 in London. No word yet on whether it will show elsewhere.

Or if it will cover the plots from all the books. The show promises to be "immersive" for fans, but how could anyone make the action-packed films into a stage production?

Well, for starters, an entirely new and specialized theater will be built specifically for this show. No further details on that yet, though.

Many are noting Lionsgate is taking a page out of Disney's book here. "The Lion King," "Aladdin" — the mouse house has brought many of your favorite childhood movies to the stage.

Whether a Broadway show will work for the young adult crowd remains to be seen, but given "The Hunger Games" rampant success on the big screen, the odds are in its favor.

Lionsgate really seems to be building out the "Hunger Games" world for fans — it also announced a "Hunger Games" exhibition that will feature pieces from the films. That'll come to the U.S. this summer.

The next "Hunger Games" film — which, of course, is not a musical  — hits theaters Nov. 21. So this live musical announcement is pretty perfectly timed.