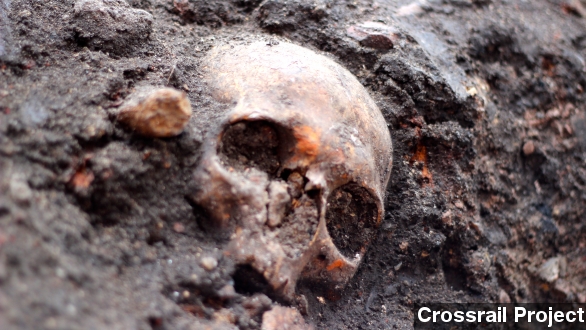 An excavation in London has turned up hundreds of skeletons from a burial ground dating back hundreds of years. (Video via Crossrail Project)

It's the site of the Bedlam burial ground, which served as a final resting place for thousands of Londoners from the 16th century through the 18th century.

"Over a period of 200 years were up to 20,000 Londoners, of all different types. And where we're going to excavate the last remaining part of that burial ground where we think we're going to find another 3,000 or so," Crossrail's Jay Carver told London Live.

The burial ground was used during the Great Plague of London in the mid-1600s, an outbreak that killed an estimated quarter of the city's population.

The excavation is part of the Crossrail construction project, which is building a new train line that will stretch from west to east across the city. (Video via Crossrail Project)

Basically, because London, especially central London, is so old, it's pretty hard to dig in the city without finding something.

For example, at the Liverpool Street site where the burial grounds are, the archeologists expect to find Roman suburbs, which would date back to the city's very earliest history as a Roman settlement.

The project dug up another plague burial site last year at Charterhouse Square, about a mile west of the Liverpool Street site — although that was a different plague, the 14th century's Black Death pandemic.

If you're wondering, yes, London's had a lot of plagues: The Museum of London estimates the city saw one every 20 years or so between the 14th and 17th centuries and didn't really stop until most of the city burned down in 1666's great fire.

So in that respect, it's not surprising that the project keeps digging up bones: What might be surprising is the scale of Crossrail's archeological endeavor.

The project has archeological digs at each of its more than 40 construction sites and has organized educational ventures as well, including school visits to the dig sites.

But the Crossrail project has faced criticism for not paying as much respect to recent history. Multiple historic concert venues have been demolished in the process, including the London Astoria, which hosted Radiohead, Nirvana and the Smashing Pumpkins, among others. (Video via Lobster Pictures)

Archeologists at the Liverpool Street dig site hope to identify some prominent individuals among the skeletons there, including a former mayor of London.

This video includes images from Crossrail and Ben Sutherland / CC BY 2.0.