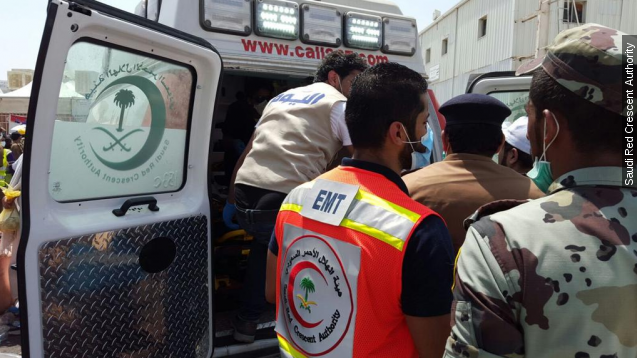 SMS
Hundreds Die In Hajj Stampede
By Jake Godin
By Jake Godin
September 24, 2015
More than 700 died Thursday when a stampede erupted near Mecca during one of the final rituals of the Hajj pilgrimage.
SHOW TRANSCRIPT

More than 700 people are dead and at least 800 injured after a stampede in Saudi Arabia.

It happened in Mina, near the holy city of Mecca, during one of the final rituals of the Hajj pilgrimage.

Called "the stoning of the devil," millions of Muslim pilgrims gather to throw stones at rock pillars.

Saudi Arabia's civil defense force says 4,000 personnel and 220 ambulances and rescuers had been sent to the scene.

Close to 350 pilgrims died in a similar stampede during the stoning ritual in 2006. (Video via Saudi TV Channel 2)

This video includes images from Saudi Civil Defense Directorate and music by Chris Zabriskie / CC by 4.0.