Humanity's Hobbit-Like Ancestor Is Way Older Than We Thought 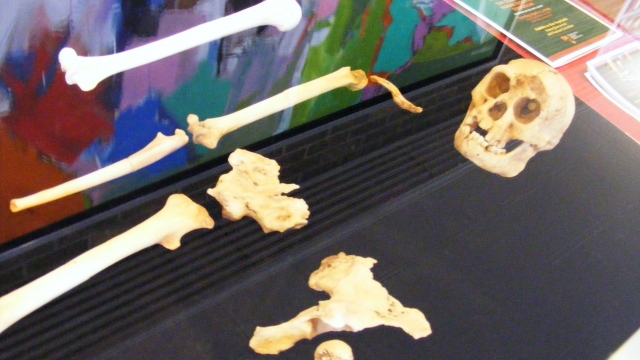 SMS
Humanity's Hobbit-Like Ancestor Is Way Older Than We Thought
By Evan Thomas
By Evan Thomas
March 30, 2016
A diminutive ancestor to modern humans lived in isolation in Indonesia, where it died out earlier than we thought.
SHOW TRANSCRIPT

It turns out modern humans have been alone longer than we thought. New research shows Homo floresiensis, the famous hobbit people of Indonesia, died out well before humans even started drawing on cave walls.

That's based on new excavations at a cave on Flores, an island in Indonesia where the species was first discovered in 2003.

The hobbits' skeletons suggest short stature, small brains and large feet. But they used tools, hunted animals and may have used fire.

Evidence from the first digs showed the hobbits lived relatively recently, just 12,000 years ago. But new analysis dates their presence from 50,000 to 190,000 years ago.

The huge difference in findings has to do with soil erosion. The researchers say the earlier age estimates didn't account for how the cave floor might have shifted around.

The new timeline means the hobbits arose around the same time Homo sapiens did, and probably overlapped with Homo erectus, too.

They probably still lived in isolation, though. Flores is an island, after all, and the hobbit's small size suggests it was adapted to scarce resources.

This video includes clips from Nature / Sutikna et al. and images from Cahyo Ramadhani / CC BY SA 3.0, the Liang Bua Team and Mamoritai / CC BY SA 2.0.