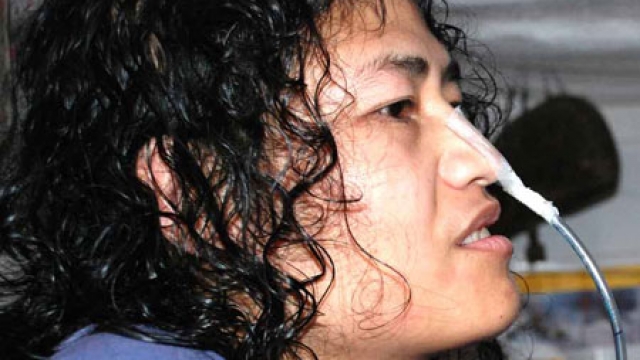 "I am being the real embodiment of revolution," Irom Sharmila told reporters as she ended her hunger strike.

And on Tuesday morning, she finally broke her fast, which ended up being the longest hunger strike in history.

Irom Sharmila, who's also known as the "Iron Lady of Manipur," started the strike in 2000 when 10 civilians were killed in a shooting that critics accuse Indian soldiers of starting in Manipur state.

Her goal: to get the Armed Forces Special Powers Act repealed.

The law gives security forces unchecked power to search and enter property unannounced and even shoot on sight.

Soon after Sharmila's hunger strike began, she was arrested under an Indian law that makes attempting suicide illegal and was detained in a hospital room.

And there she stayed for over a decade with a feeding tube forced up her nose to keep her alive.

The maximum sentence for attempted suicide is one year. So, once a year, the courts would release Sharmila.

But she would immediately fast in a shed near the hospital, and authorities would re-arrest her within days. And the cycle continued.

But on Tuesday, she was granted bail after assuring a judge last month she planned to end her hunger strike for good.

Sharmila told reporters she wants to run as an independent candidate in the Manipur election early next year.

And the sole issue on her agenda? To remove the Armed Forces Special Powers Act.