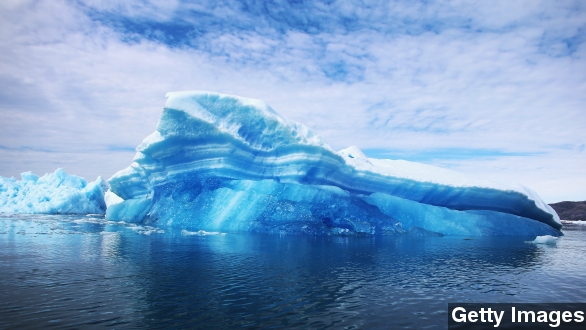 Climate scientists have argued human activity is responsible for a significant portion of glacier melting but haven't been able to pinpoint just how much of an affect we've had until now.

A panel of researchers put together by the United Nations found human-made greenhouse gas emissions account for about two-thirds of glacier melting specifically between 1991 and 2010. In the 140 years prior to 1991, they said humans only contributed about a quarter of the total amount. (Video via Submarine Deluxe / 'Chasing Ice')

This marks the first time scientists have been able to attach a specific number to how drastic an effect the human carbon footprint is having on ice melting — especially recently.

The lead researcher​ is quoted in USA Today saying, "In our data we find unambiguous evidence of anthropogenic (human-caused) contribution to glacier mass loss. ... In the 19th and first half of 20th century we observed that glacier mass loss attributable to human activity is hardly noticeable, but since then has steadily increased."

The researchers used data from the Randolph Glacier Inventory — which is a global database created a couple years back, in large part, to help climatologists track sea levels.

According to LiveScience, the researchers studied around 200,000 different glaciers in the catalog using various climate models.

They were able isolate both human-made and natural influences on the environment and found a substantial and growing influence from manmade emissions especially in the past 25 years. (Video via National Geographic)

So why does it even matter that glaciers are melting so fast?

Well, the obvious affect is rising sea levels which has recently caused many island nations who are the first ones to feel the affects of rising waters to seek help from the United Nations. (Video via YouTube / eddywyc​)

And, it could do a number to water supplies and possibly lead to droughts. National Geographic points out when ice melts and becomes water, it evaporates faster because "glacial ice keeps the water locked away in a form in which it doesn’t easily evaporate." Plus, the cycle doesn't appear to replenish once the ice is gone.

The study's author also told NBC roughly 70 percent of glaciers could be gone by the turn of the century if nothing is done to reduce manmade green-house gas emissions. But, if significant measures were taken it's still possible to curb the trend.