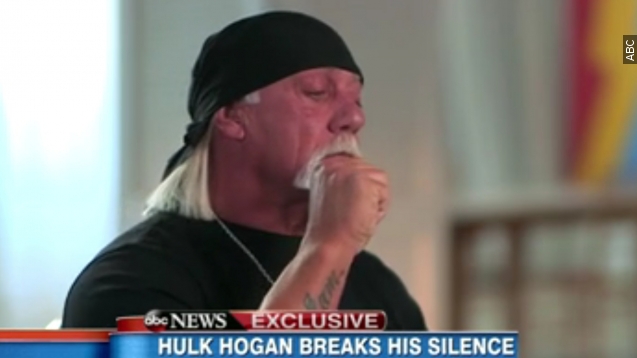 Pro wrestler Hulk Hogan was kicked out of WWE in July for racist comments he made about someone his daughter may or may not have been dating.

Hogan didn't know he was being recorded and used a racial slur when he was talking about  his daughter and a black man.

In an interview with ABC, which aired Monday, he said he was at a low point in his life when he made those comments.

"Out of everything that I've been through, this one probably hit me the hardest," Hogan said in the interview.

And he has been through a lot. In the past decade, he has gotten divorced from his wife of 25 years, opened up about his steroid and cocaine use, had an affair with a friend of his daughter's, had his sex tape leaked and then filed a lawsuit with Gawker, among other things.

Hogan teared up during that ABC interview when his daughter Brooke was mentioned. He said Brooke told him she was never mad at him in the first place.

He also said he was devastated to be kicked out of WWE after nearly 30 years with the organization. The former wrestler said it's being made to look like his whole career "never happened."