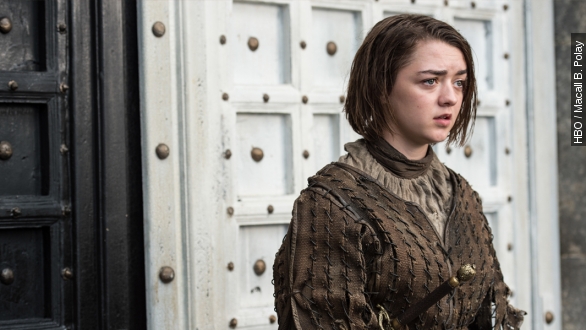 So it shouldn't be much of a surprise that the big headline ahead of the show's season five premiere Sunday had to do with people watching it illegally.

Low resolution versions of four of the season's 10 episodes began appearing on piracy sites over the weekend and were downloaded more than a million times before the first episode even aired.

HBO said in a statement to Mashable Sunday, "Sadly, it seems the leaked four episodes of the upcoming season of Game of Thrones originated from within a group approved by HBO to receive them," meaning the leaked episodes were probably from an early copy sent to TV critics for review.

This is an unusually severe leak, even for the defending champion in illegal downloads. And having nearly half the season already available could undermine some of HBO's big plans.

In past seasons, the network took a pretty relaxed stance on the whole piracy issue, with one executive telling investors in 2013 that the title of "most pirated show" was "better than an Emmy."

"To us, it's in many ways a terrific marketing vehicle for the next generation of viewers, and it is actually not material at all to our business growth."

But this year, for the first time, it seemed like HBO was trying to turn pirates into subscribers.

Last month, the company announced it would air "Game of Thrones" simultaneously all over the world, lessening the incentive to pirate in countries with a viewing delay.

And then there's the standalone streaming service HBO Now, which lets viewers without cable pay for HBO content, though it's currently only available to Apple and Optimum customers.

It's not clear how the leak will affect those plans, and, barring another major leak, the pirate audience will have to wait just as long as the rest of us to see how the season ends.

This video includes images from HBO.