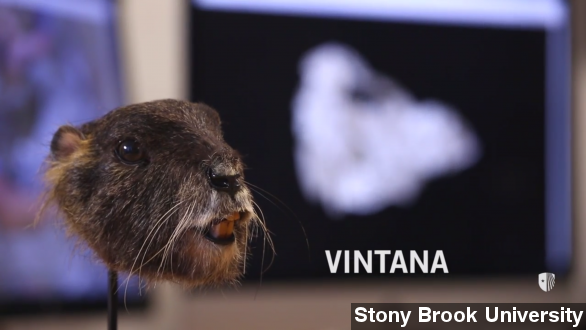 One of the largest mammals to ever live amongst the dinosaurs has been discovered ... and it's actually not that big.

This is Vintana sertichi, a mammal that lived some 66 million years ago and weighed in at some 20 pounds, making it the second-biggest mammal known to have lived alongside dinosaurs. (Video via WCBS)

DAVID KRAUSE, STONY BROOK UNIVERSITY: "Most mammals that lived during the age of dinosaurs were small, shrew-size, mouse-size. But this animal, Vintana, was huge. It was, say, twice the size of a modern groundhog. That is enormous during that interval of time."

Researchers discovered the mammal's skull in Madagascar, which means it would've lived on the supercontinent of Gondwana, which later broke up into South America and Africa.

That makes it a Gondwanatherian, which makes this discovery even more significant. The Gondwanatherians are an extinct group of mammals shrouded in mystery because scientists have only discovered fragments of their fossil record.

Which might help explain lead researcher David Krause's excitement at the discovery...
CHRISTINE INSINGA, NEWS 12 LONG ISLAND: "Do you remember your reaction at that moment?"

KRAUSE: "Yes, I remember being very excited and what I said probably can't be repeated."

Although Vintana isn't related to any existing mammal species, as one researcher wrote in Nature, its discovery could tell us a lot about how our actual ancestors evolved as their continent broke up, writing, "It may indeed prove to be that Pangaea's fragmentation contributed to mammalian diversification during the Mesozoic."

Diversification that left Vintana with a diverse set of features so odd a University of Chicago paleontologist told National Geographic, "The very exotic combination of its skull features are so beyond our previous imagination."

Krause says Vintana's singular features could be due in part to the fact that it evolved on Madagascar, which has been an island for millions of years.