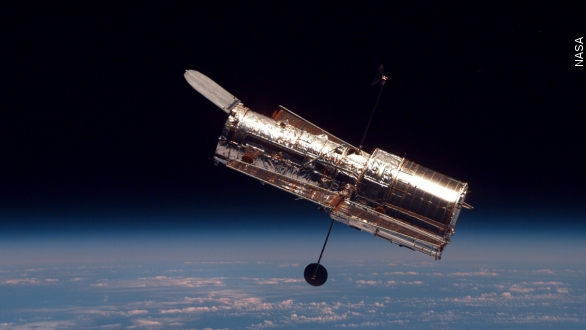 SMS
Hubble Telescope: 25 Years Of Revealing The Universe
By Evan Thomas
By Evan Thomas
April 24, 2015
Despite a blurry start to its service, the Hubble Space Telescope is still serving as one of the best visual science tools on or off the planet.
SHOW TRANSCRIPT

The Hubble Space Telescope turns 25 Friday. In its quarter century in orbit, it's given us some of the best views we have of the observable universe.

Hubble takes its name from astronomer and cosmologist Edwin Hubble, whose research helped build our understanding of the universe beyond our home Milky Way galaxy.

It operates like any other optical reflector telescope, just scaled up and orbiting at 343 miles overhead. (Video via ESA/Hubble)

A primary mirror nearly 8 feet across (7 feet, 10.5 inches) captures light from billions of light-years away and feeds it into six sensors, which between them measure visible, ultraviolet and infrared light. The telescope uses reaction wheels and gyroscopes to orient itself with extreme precision: if Hubble were a laser pointer, it would be able to light up a dime 200 miles away. (Video via ESA / Hubble)

But once it powered up in orbit, Hubble almost immediately showed trouble with its primary mirror. The glass had been ground incorrectly, and anything astronomers pointed Hubble at came out blurred. It was better than ground-based imaging, but not as sharp as they'd expected.

So the first maintenance mission to Hubble corrected the mirror with specialized hardware — space glasses, basically. The results were as striking as any visit to the optometrist.

Hubble would get four more service missions to upgrade and expand its cameras, replace stabilizing gyroscopes and install new computers for faster image processing. Since the last maintenance flight in 2009, Hubble has been running smoothly. (Video via NASA)

And to date, for clear visible-light images of distant cosmic objects, there's basically no better instrument in science. (Video via NASA)

Hubble has the best vantage point on — or off — the planet. From above the interference of Earth's atmosphere, it's captured some of the most detailed visible-light images ever recorded. (Video via ESA / Hubble)

Hubble effectively looks into the past: Its deep field projects capture light that is billions of years old. Scientists use the data to track the age and development of the visible universe and its rate of expansion. (Video via NASA)

On a smaller scale, Hubble has discovered and tracked planets outside the solar system, such as this first-ever visible-light image of an extrasolar planet, known as Fomalhaut b. Hubble's detectors can spot clues in the spectral emissions of such planets to tell scientists what they're made of.

Along the way, it's generated iconic real-color images of distant nebulae, dense star clusters and nearby neighbors. Scientists have used Hubble to watch the rare impact of comet Shoemaker-Levy 9 on Jupiter and to capture high-resolution images of our own moon.

One of the few things Hubble isn't suited for is looking back at Earth, which it's orbiting at 5 miles per second. Even with its fastest cameras, all it would see is Earth-colored blur. (Video via ESA / Hubble)

Astronomers at the Space Telescope Science Institute hold Hubble up as one of the most useful astronomy installations ever built, not to mention one of the most prolific. Scientists have published more than 10,000 articles based on Hubble data and images.

And for the moment, not even Hubble can see an end to the science it will enable. There's no concrete end date for Hubble operations; officials have said they'll keep it running as long as economically feasible or until something breaks.

This video includes images from RadioFan / CC BY SA 3.0, NASA and the European Space Agency and music by Planet Boelex / CC BY NC ND 3.0.