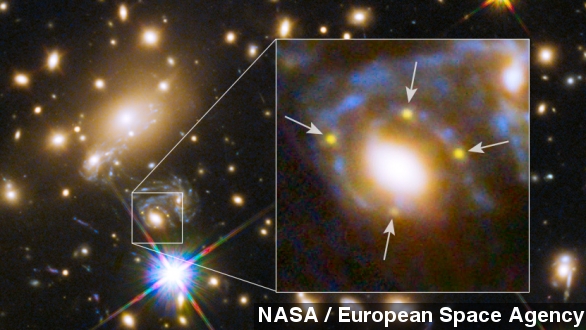 SMS
Hubble Sees Rare 'Einstein Cross' Image Of Distant Supernova
By Steven Sparkman
By Steven Sparkman
March 5, 2015
A rare trick of the light caused by the gravity of a distant galaxy caused Hubble to see four images of the same supernova at once.
SHOW TRANSCRIPT

Astronomers have compared it to finding a four-leaf clover. Images from the Hubble Space Telescope show a distant galaxy framed by four images of the same supernova, a kind of mirage that's been dubbed an "Einstein cross." Yep, that's the same supernova on all four sides of the galaxy.

The unusual phenomenon comes from the fact that light can be bent, like in a magnifying glass. Only instead of glass lenses, it's gravity that does the bending, like the gravity from galaxies or even galaxy clusters.

It's called gravitational lensing, and it's a common trick of the light that shows up in tons of deep space images.

In this case, light from a distant supernova was warped on its way to Earth when it passed through a galaxy cluster, splitting the image into four.

Now, although the lensing effect is common, seeing multiple images of the same object at once is actually pretty rare.

It's been observed a few times with things like this quasar, the first object to earn the "Einstein Cross" nickname. But a Johns Hopkins University astronomer says this is the first supernova.

"Eventually, someone was going to find a supernova that was multiply imaged. It is really quite remarkable that the first multiply imaged supernova was not a double or a triple but an Einstein Cross," astronomer Steve Rodney said.

Aside from just looking cool, the new image lets astronomers study a supernova from multiple angles, which is a first. And they may see the same exploding star show up again in future lensed images when the light from the explosion passes behind another galaxy cluster in 5 to 10 years.