Hubble's Space Photos Have Come A Long Way In 25 Years 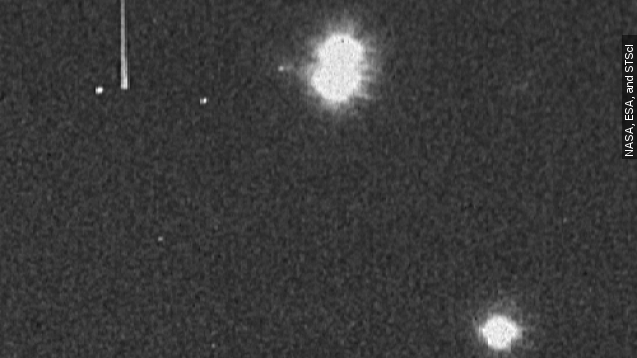 SMS
Hubble's Space Photos Have Come A Long Way In 25 Years
By Evan Thomas
By Evan Thomas
May 20, 2015
It took a few months and a maintenance mission to get Hubble ready to create the high-resolution images it’s known for.
SHOW TRANSCRIPT

The Hubble Space Telescope is known for its dazzling images of cosmic phenomena, but it didn’t exactly start that way.

Its first ever image, captured 25 years ago today, is decidedly less exciting. This is HD96755, a part of star cluster NGC 3532, about 1,300 light years away. It underwhelmed people back then, too.

After its launch, the Hubble Space Telescope had an attached PR campaign touting it as a scientific improvement over ground-based telescopes of the time. (Video via ESA/Hubble)

David Leckrone was Hubble’s senior project scientist until 2009. As he told Time, expectations were high. Reality was still kind of blurry. (Video via C-SPAN)

“The astronomers groaned when the media was invited. And everyone was a little perplexed and uncomfortable when the image came in because it was so out of focus. Someone said ‘Is that the way it’s supposed to look?'”

No, it wasn’t. This image came before any calibration or fine-tuning of Hubble’s instruments.

There was no post-processing, either. The images Hubble is known for go through an extensive cleanup and color-assignment process to get as good-looking as they are. (Video via the Space Telescope Science Institute)

That shot of HD96755 was what’s known as a “first light test.” It’s more to certify the cameras and mirrors are all working than to show off what they’re capable of.

Of course, it didn’t help that Hubble’s primary mirror was also flawed.

The first maintenance mission to Hubble, flown by the Space Shuttle Columbia in December 1993, delivered specialized hardware to correct the mirror and sharpen the images it captured.

Over the next months, astronomers dialed in their process and started turning out images Hubble is much better known for.

And to this day, Hubble is still at it. NASA says the telescope will keep collecting images for as long as it stays in working condition. (Video via NASA)

This video includes images from NASA and RadioFan / CC BY SA 3.0.