HTC And Valve Team Up For Virtual Reality Headset 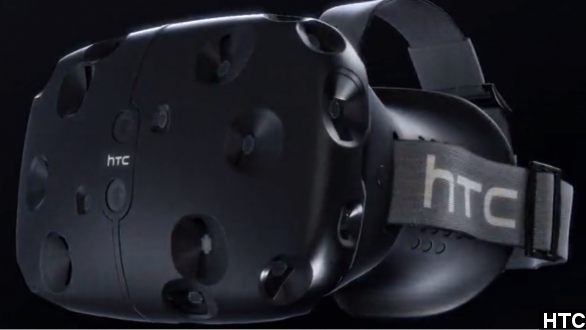 SMS
HTC And Valve Team Up For Virtual Reality Headset
By Matt Picht
By Matt Picht
March 1, 2015
HTC unveiled Vive, its new virtual reality headset, Sunday. The device is supported by gaming company Valve, which has made a push into the market.
SHOW TRANSCRIPT

HTC kicked off the Mobile World Congress in Barcelona with a bang Sunday by announcing something most of the gaming world has been waiting for — a virtual reality headset powered by Valve.

It's called the Vive, and HTC plans to ship it to developers this spring, with a consumer version available later this year. There haven't been any hands-on demos of the device yet, but here's what HTC is promising.

In terms of visual fidelity, the Vive will feature a 1200- by 1080-pixel screen for each eyeball, with a 90 frames-per-second refresh rate. Users will be able to look around, interact with and even move about their virtual environments thanks to head tracking, custom handheld controllers and location tracking.

But hardware isn't the only thing the Vive has going for it. HTC also announced a slew of partner companies that will produce VR content for the device. HBO, Lionsgate and Google are probably the most recognizable names on the list.

There are also a few high-profile indie game studios in the mix, like Bossa Studios and Fireproof Games, along with more VR-centric companies like Skillman & Hackett and Wemolab.

The partnership between HTC and Valve makes a lot of sense: HTC's device-making experience pairs nicely with Valve's research into VR.

And both companies have incentives to get into the virtual reality game now: HTC's been watching from the sidelines while rival companies like Samsung, Sony and Microsoft demo their shiny new VR products.

And the Vive will give Valve a way to compete with Facebook's Oculus Rift for the VR gaming market, as well as a new platform for its popular games marketplace, Steam.

A massive new product launch like this would also be the perfect time for Valve to unveil the long-awaited installment of a certain revolutionary PC gaming franchise. You know. Just saying.

Valve promised a more in-depth look at the Vive and SteamVR during this year's Game Developers Conference, which takes place this week.