How Your Dentist Could Help Screen You For Diabetes 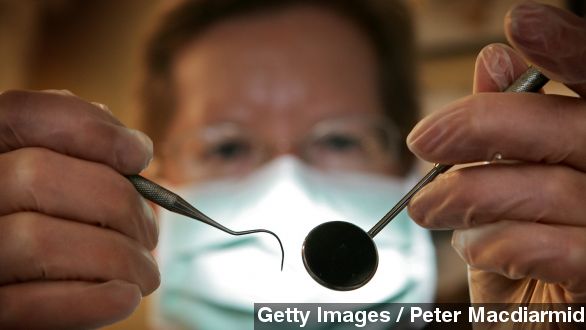 SMS
How Your Dentist Could Help Screen You For Diabetes
By Ben Levin
By Ben Levin
February 27, 2015
A new study from researchers at New York University suggests dentists could soon use blood samples taken from patients' mouths to test for diabetes.
SHOW TRANSCRIPT

Between cavities, plaque, gingivitis and about a thousand other things, people have a lot to worry about when they go to the dentist's office.

And according to a new study from researchers at New York University, diabetes could soon be added to that list.

The study took the blood of 408 people who were either diagnosed with or at risk of of diabetes. They took blood in two ways: first using the traditional "finger-prick" technique and then again using a new technique, taking blood directly from the patient's mouth.

They tested both samples for diabetes, and voila: Blood taken from the mouth matched the "finger-prick" results 99.1 percent of the time.

Diabetes is a growing health concern. It's the seventh-leading cause of death in the U.S., costs Americans an estimated $245 billion a year and afflicts an estimated 29 million people.

That makes the study a big deal for public health officials. Of those 29 million Americans, about 8 million of them aren't officially diagnosed and don't receive treatment.

The researchers say the study could make your dentist an important ally in the fight to identify diabetes — before the disease leads to more serious problems.

So the next time you're sitting in the dentist's chair and you feel a little prick, don't worry. They might be trying to save your life.