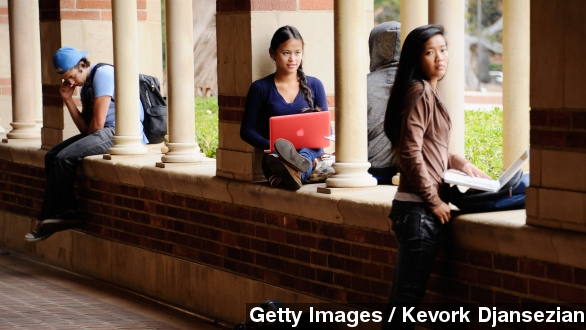 SMS
How Young, Diverse Voters Will Shape 2016's Elections
By Zach Toombs
By Zach Toombs
December 25, 2014
The southwest will be especially up for grabs in 2016, as younger and more diverse voters put Arizona, New Mexico and Colorado in play.
SHOW TRANSCRIPT

In the southwest, Democrats will try to hold on to New Mexico, and make a grab for Arizona for the first time in decades.

Especially in the midterms, when voters as a whole skew older and more conservative. Soon-to-be Republican Gov. Greg Abbott blew out his Democratic opponent Wendy Davis with 59 percent of the vote. And Texas' Hispanic voters lean more Republican than in other states.

Still, not just in the southwest, but nationwide, the GOP has a clear challenge. It's message plays well with whites, but struggles with minority voters. Just in the last 10 years, the share of eligible white voters has dropped from 75 percent to 70 percent. And that drop will likely speed up in the next decade.

Of course, another big demographic in 2016 will be the youth vote. But it's not as reliably Democratic as it used to be.

Yes, the president and other Democrats still win millennials. But November's midterms continued a trend that's concerning for the left. While young voters voted Democrat by a 22 percent margin in 2006, by 2014, that advantage had slipped to 11 percent.

And many millennials are starting to abandon the two-party system altogether. Pew Research tells us 50 percent of millennials now identify as political independents, despite being as liberal as ever on the issues.

If Republicans can chip away at the youth and minority vote, it could help them hold on to vital Florida and possibly take back Virginia, where the GOP hasn't won since 2004.