How Would The Keystone XL Pipeline Affect The U.S.? 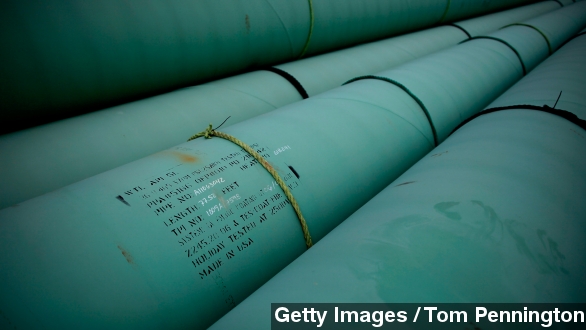 When the 114th Congress starts up on Tuesday, one of the first issues on its agenda will be the Keystone XL pipeline — an expansion of the existing Keystone pipeline.

The bid to expand the pipeline has been hotly contested over the last six years, and the president is expected to veto the latest bill to expand it, with some Democrats in support. (Video via The White House)

Senator Chuck Schumer told CBS's Face The Nation, "There will be enough democratic votes to sustain the president's veto."

But what impact will the pipeline's expansion actually have if approved? To answer that, there are a couple other questions worth considering.

Who is building it?

The last part of the expansion that is awaiting approval is the northern leg, which runs from Alberta, down through Montana and South Dakota to Nebraska. (Video via The Washington Post)

Why is it being built? (Video via United Association)

The pipeline expansion would be used to expedite the transport of oil from tar sands in Alberta down to the Gulf of Mexico, where a bulk of the U.S.'s refineries are located. (Video via CCTV)

What's done with it then is kind of up in the air — Canadian oil companies could look to export it, although Democratic senators are looking to add amendments to the expansion bill that would prevent that. (Video via Suncor Energy)

How will it affect the U.S.?

That's the big question, and it's not really clear.

Critics like President Obama argue a Canadian company is set to profit on a Canadian project for Canadian oil, that just happens to run through the U.S., and will employ a few thousand Americans only temporarily. (Video via The White House)

Low oil prices, unrelated to the pipeline, have already translated to super low gas prices, and the pipeline could actually raise gas prices, especially in the Midwest. (Video via WLFI)

That's because, as CBS points out, the region already imports more than half of its oil from Canada to be refined in Ohio and Illinois, among other states. That oil would be diverted for Keystone, leading to more expensive imports.

And there are environmental concerns as well, with critics claiming construction of Keystone XL will threaten wildlife, and leaks in the underground pipeline could contaminate the water supply in areas it would pass through. (Video via Sierra Club)

Still, supporters claim the project would add as many as 42,000 jobs, and even though they would be temporary, it could present a boost to the economy. (Video via RT)

Senate Majority Leader Mitch McConnell says the Keystone expansion bill will be the Senate's first vote when it goes into session on Tuesday.