How Will The Fed's Rate Hike Affect Your Loans, Savings, Credit Debt? 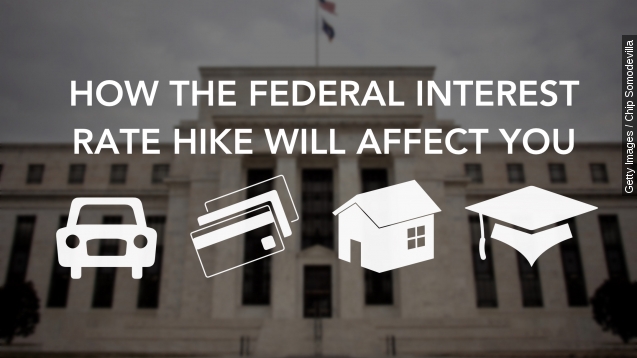 SMS
How Will The Fed's Rate Hike Affect Your Loans, Savings, Credit Debt?
By Jake Godin
By Jake Godin
December 16, 2015
The Federal Reserve's interest rate is going to have an impact, but it's probably smaller than you'd imagine ... for now.
SHOW TRANSCRIPT

The U.S. Federal Reserve has raised interest rates for the first time since 2006.

"Doing so will be a testament also to how far our economy has come in recovering from the effects of the financial crisis and the Great Recession," Federal Reserve Chair Janet Yellen said at The Economic Club in Washington, D.C.

So what will it mean for folks with auto loans, student loans, credit card debt or savings accounts?

Well, if you're taking out a $25,000 auto loan, a quarter-point increase means you'll only be paying about $3 more a month. Not bad.

Student loans depend on what type of rate you have: variable or fixed. Fixed rates won't change; those are locked in. This includes any federal student loans. Variable-rate loans will keep pace with increases to the federal interest rate.

Likewise, credit card rates will go up at a similar pace. Every time the fed raises its interest rate, the rate on cards will go up as well.

As for savings, there is some good news here. Your rates will go up — in time.

The main thing to keep in mind with the federal interest rate hike is that it's small at first. Because of that, its effects are small — at first. As rates continue to go up, though, you may start to feel it more.