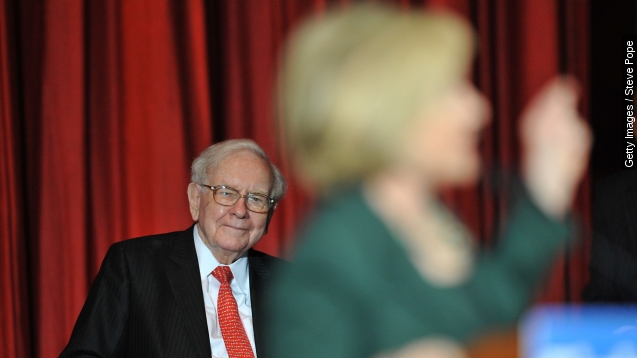 Billionaire Warren Buffett is throwing his money, and his word, behind presidential candidate Hillary Clinton.

"With that, I would like to introduce the next president of the United States," Buffett said on Wednesday.

Buffett endorsed Clinton at a rally in Omaha, Nebraska, where the Democratic front-runner proposed more taxes for the rich if she's elected president.

Clinton said she wants to "go even further" than The Buffett Rule, and she wants to be president "for the struggling, the striving and the successful."

The Buffett Rule is "the basic principle that no household making over $1 million annually should pay a smaller share of their income in taxes than middle-class families pay."

"That's pretty sensible. Most Americans agree with me. So do most millionaires," President Obama said in April 2012.

The Buffett Rule was the driving force behind President Obama's 2012 push for millionaires to pay at least 30 percent of their income in taxes.

Obama coined the phrase after Buffett's continuous criticism of the tax system, including the fact the billionaire's secretary gets taxed at a higher rate than he does. (Video via ABC News)

"Mine came to 17.7 percent. The average for the office was 32.9 percent. There wasn't anybody in the office, from the receptionist on, that paid as low a tax rate," Buffett told NBC.

Buffett has also been a longtime Clinton supporter, so his endorsement doesn't come as a huge surprise.

Buffett, the second richest person in the U.S. and chairman of Berkshire Hathaway, is worth about $62 billion.