How To Search For Mars Life Without Contaminating Everything 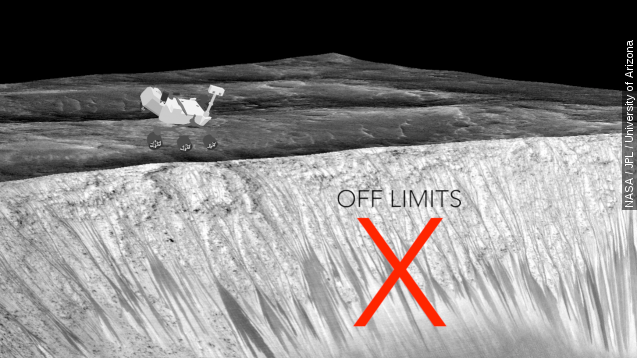 SMS
How To Search For Mars Life Without Contaminating Everything
By Evan Thomas
By Evan Thomas
October 23, 2015
Future Mars rovers will have to meet strict sterilization requirements if they're going to return Martian samples to Earth.
SHOW TRANSCRIPT

We've talked about the strict rules NASA has to follow when it comes to contaminating Mars with Earth life. But the agency still has plans to try to find life on the red planet.

To do this, things have got to be clean. The Curiosity rover was sterilized before launch, but even it isn't clean enough to enter Mars' so-called "special regions," areas like the watery slopes NASA recently announced.

The Mars 2020 mission will be clean enough. The probe will carry a coring drill that can collect samples for later return to Earth. And it will be required to have fewer than 15,000 spores on board.

For comparison, the National Institutes of Health has measured 39,000 bacteria per square centimeter on the average hand.

That level of clean is stricter than an operating room. NASA technicians working on the spacecraft and landers before they launch have to wrap up. (Video via NASA)

Their work areas and the space hardware itself gets treated with everything from gamma radiation and autoclaves to hydrogen peroxide plasma to cut down on microbe counts. (Video via NASA)

And this is before NASA brings anything back. That's its strictest procedure. (Video via NASA)

If NASA retrieves any samples from the Mars 2020 rover, they cannot under any circumstances risk "destructive impact" here on Earth. Or any leakage whatsoever.

Per NASA's requirements, "The probability that a single unsterilized particle of 10 nanometers or greater in diameter is released into the Earth environment" shall be less than one in 1 million. (Video via NASA)

NASA's just as concerned about bringing Mars life back to Earth as it is the other way around, and for good reason: We're not 100 percent sure what extraterrestrial samples will do here if they get loose.

The funny thing is, these automated returns are actually some of the most intense re-entries in space exploration. When the Stardust sample return capsule came back, it set the record for the fastest man-made thing to re-enter the atmosphere and sustained temperatures of more than 5,000 degrees Fahrenheit. (Video via NASA)

The Mars 2020 team hasn't laid official plans for returning its samples yet, though. It's still working out where on Mars to land.

The mission will launch, as you might have guessed, sometime in 2020.