How To Almost Smuggle 16,000 lbs. Of Cocaine Internationally 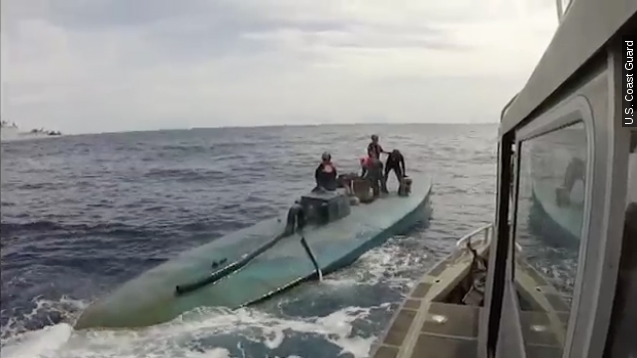 SMS
How To Almost Smuggle 16,000 lbs. Of Cocaine Internationally
By Kate Grumke
By Kate Grumke
August 7, 2015
The Coast Guard has been finding homemade, drug smuggling, half-boat, half-submarine vessels for about a decade.
SHOW TRANSCRIPT

And this is how drug traffickers were trying to smuggle it across countries. That's a homemade submarine.

In July, the Coast Guard stopped the semi-submersible boat in the Eastern Pacific, 200 miles south of Mexico. There were four alleged Colombian drug smugglers on board.

The Coast Guard got 12,000 pounds of cocaine off of the submarine, but the vessel sank as they tried to tow it to shore. Another 4,000 pounds went to the bottom of the ocean with the sub.

This is the biggest bust of its kind, but the method isn't new. The Coast Guard has been finding homemade, drug smuggling, half-boat, half-submarine vessels like this for a decade.