How This Cease-Fire Between Russia And Ukraine Is Different 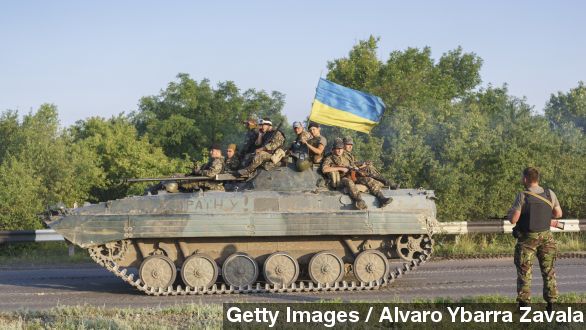 SMS
How This Cease-Fire Between Russia And Ukraine Is Different
By Jake Godin
By Jake Godin
February 12, 2015
Russia and Ukraine have settled on a new cease-fire agreement that will go into effect Feb. 15. Whether it will hold up is the big question.
SHOW TRANSCRIPT

After 17 hours, negotiations in Minsk are over. (Video via The Kremlin)

European leaders have agreed on another cease-fire, hoping to end fighting in Ukraine.

The leaders of Russia, Ukraine, Germany and France announced the cease-fire Thursday morning. It's set to begin at midnight on Feb. 15. (Video via Euronews)

"It hasn't been the best night in my life, but it is indeed a good morning because in spite of all the difficulties of the negotiations, we have managed to reach an agreement on the most important thing," Russian President Vladimir Putin said while announcing the cease-fire.

The deal stipulates both the Ukrainian army and pro-Russian separatists will release any prisoners of war they have. (Video via News-Front)

It also calls for both sides to pull heavy weapons out of conflict zones like the battered Donetsk region by Feb. 17. Donetsk is where months of intense fighting has taken place. (Video via Radio Free Europe / Radio Liberty)

According to RT, the deal has a number of other provisions including monitoring by international organizations, a special status vote on separatist regions within 30 days and greater political reform by the end of 2015.

The cease-fire is similar to one which was agreed last September. In addition to pulling back heavy weapons and releasing prisoners, that agreement also called for greater autonomy in the Donetsk and Luhansk regions of Eastern Ukraine. (Video via CNN)

September's cease-fire ultimately fell apart soon after being agreed to. So how is this one different?

The BBC's Paul Kirby says that, for one, the distance heavy weapons are to be hauled back is greater with a minimum of 31 miles instead of the 9 miles previously agreed to. This means civilians on both sides will be safer. (Video via Ukraine Ministry of Defense)

Of course, the weapons could come back. But other stipulations such as a more structured approach to decentralization and ensuring Ukraine controls its entire border with Russia may help keep both sides from pulling the trigger again. (Video via The Kremlin)

The Washington Post notes one potential pitfall is Debaltseve, a government-held town almost completely surrounded by separatists. That position could prove problematic if neither side is willing to pull back. (Video via Ukraine Ministry of Defense)

While the cease-fire doesn't officially begin for a few days, a BBC correspondent says he has already heard explosions in Donetsk since it was signed. German Chancellor Angela Merkel says there's now at least a "glimmer of hope" for success.