How The 'Reluctant Warrior' Became A Wartime President 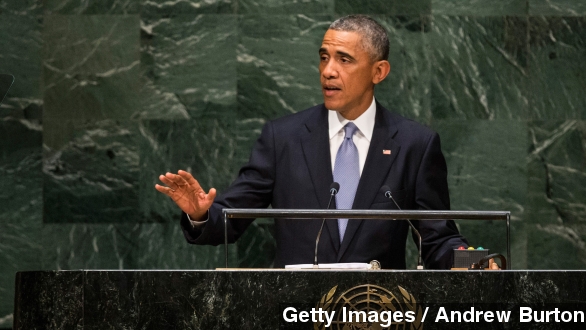 SMS
How The 'Reluctant Warrior' Became A Wartime President

By Elizabeth Hagedorn
September 24, 2014
After vowing to end the war in Iraq, President Obama finds himself leading the country into another one.
SHOW TRANSCRIPT

The president who campaigned on ending America's wars …

OBAMA VIA NBC: "I will get our troops home. We will bring an end to this war."

… is now leading the country into a new one.

OBAMA VIA FOX NEWS: "This is what America is prepared to do — taking action against immediate threats while pursuing a world in which the need for such action is diminished."

Wednesday, Obama spoke before the United Nations not as a peacetime president but as a commander in chief overseeing another foreign war. It's a legacy the Nobel Prize laureate probably never envisioned for himself.

Hence the new label the media keeps attaching to his name.

MSNBC: "He is clearly a reluctant warrior."

MSNBC: "He is the reluctant warrior."

Granted, it might be a little strange to attach that label to him now, seeing as he's long supported a robust military strategy. Syria is now the seventh Arab country he's ordered airstrikes in since taking office.

Even in 2009, as he picked up his Nobel prize, Obama offered a vigorous defense of the use of military force when a war is considered "just."

OBAMA VIA NOBEL FOUNDATION: "To say that force is sometimes necessary is not a call to cynicism — it is a recognition of history, the imperfections of man and the limits of reason."

Reluctant or not, Obama is now a wartime president — in a turn of events former State Department official Nicholas Burns calls "almost Shakespearian."

So does the president consider himself a wartime president? A reporter posed that exact question to President Obama earlier this week.

According to The Washington Post, "The president smiled, but he did not answer."