How The Plan To 'Destroy' ISIS Is Progressing A Year Later 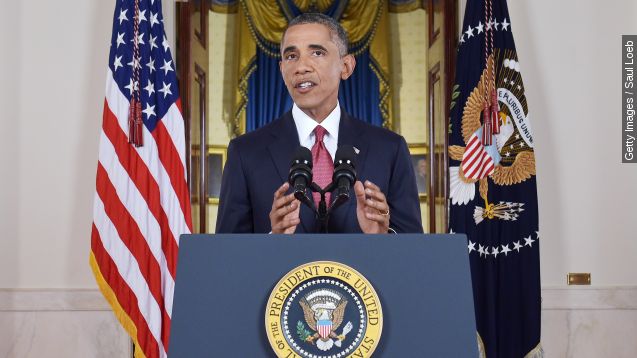 "The analogy we use around here sometimes, and I think is accurate, is if a jayvee team puts on Lakers uniforms that doesn't make them Kobe Bryant," President Obama told The New Yorker. (Video via YouTube / انصار الخلافة)

"The gunmen are believed to be members of an Al-Qaeda, the Islamic State of Iraq and Syria, or ISIS," a CNN reporter said.

"We have an interest in making sure that a group like ISIL, which is a vicious organization and has been able to take advantage of the chaos in Syria, that they don't get a broader foothold," President Obama said June 13, 2014.

"Our objective is to make sure that ISIL is not an ongoing threat to the region," President Obama said Sept. 3, 2014.

"Our objective is clear: We will degrade, and ultimately destroy, ISIL," President Obama said Sept. 10, 2014.

"It's going to be a long-term counterterrorism operation. I think war is the wrong terminology," U.S. Secretary of State John Kerry told CBS Sept. 11, 2014.

"In Iraq and Syria, American leadership — including our military power — is stopping ISIL's advance," President Obama said during his 2015 State of the Union address.

"Are we going to light our hair on fire every time that there is a setback in the campaign against ISIL?" White House Press Secretary Josh Earnest said May 19, 2015.  (Video via Al Arabiya)

One year after the fall of Mosul, the U.S. is weighing sending more troops. Will it make a difference? (Video via U.S. Army / Sgt. Anthony Alcantar)