How The Movie 'American Sniper' Could Have Ended Differently 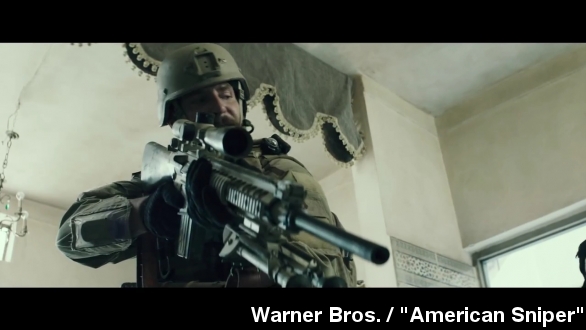 Hollywood's rendition of the life and work of Navy SEAL Chris Kyle might have looked very different.

Screenwriter Jason Hall told New York Daily News Kyle's widow "called and said, 'This is going to be how my children remember their father, so I want you to get right.'"

"It's a heck of a responsibility. We hope we get it right," Bradley Cooper told a group of veterans.

Those are words Bradley Cooper, who portrayed Kyle, echoed during screenings and tours promoting the movie.

"I don't know how you embody someone. Get the nuances. He did it. It's amazing," said Taya Kyle in an interview with NBC.

The real Chris Kyle survived four tours in Iraq and was honorably discharged before he was fatally shot in 2013 at a shooting range in Texas. The suspect is a fellow veteran.

The movie's creators planned to depict the murder, but at his widow's request, ended up dropping the scene. Those who've seen it know the film ends with Kyle alive before the shooting that took his life.

Taya Kyle played a big role in the movie's creation. Hall told Daily News he'd spent hundreds of hours talking to her and others close to the real life sniper.

And she's served as a witness in the capital murder trial of Eddie Ray Routh, the man accused of killing her husband. That trial is ongoing in Texas.