How The Most Crowded GOP Fields In History Stack Up 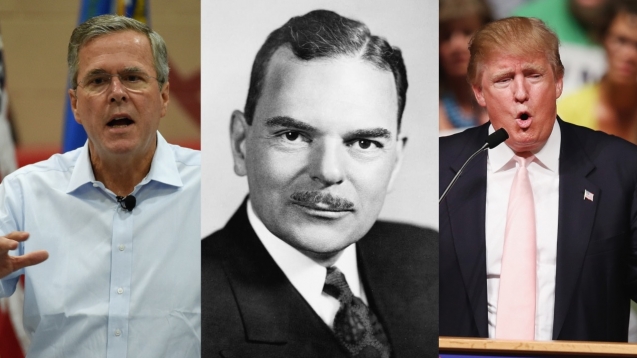 SMS
How The Most Crowded GOP Fields In History Stack Up
By Eugene Daniels
By Eugene Daniels
August 1, 2015
The Republican field hasn't been this crowded since 1948. What did the primary look like back then?
SHOW TRANSCRIPT

If you've been paying even just a little bit of attention to the GOP this election, you've probably heard this a lot:

"I am a candidate for president of the United States," former Florida Governor Jeb Bush said during his presidential announcement.

Those words have been uttered a record 17 times in the battle for the Republican presidential nomination.

The last time the GOP even came close to that number was in 1948, when the party fielded 15 presidential hopefuls.

During both election cycles, Republicans held full control of Congress, which is exciting if you're a GOP presidential candidate. Who doesn't want the full backing of the legislative branch to push your agenda through?

Unlike 2016 though, the Republicans in 1948 were taking on a pretty divided Democratic party with no Hillary Clinton-esque front-runner. (Video via Hillary Clinton)

Democrats weren't sure they wanted incumbent President Harry Truman to go to bat for them, especially Southerners. The States Right's Party was even created to take on Truman in the general election. (Video via The History Channel)

Both primary seasons had polls and pundits throwing around the word "front runner." In '48, it was New York Governor Thomas Dewey. Going into election day, a Gallup poll had Dewey winning with 49.5 percent of the vote. (Video via Newseum)

The media was so sure Truman was going to lose, papers were printed ahead of time with the headline "Dewey Defeats Truman." Awkward.

And if 1948 is a lesson in candidate longevity, settle in for the long haul. Only three candidates dropped out before the 1948 Republican National Convention.