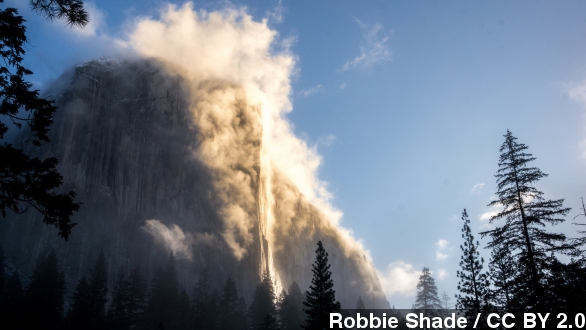 Folks love a good human achievement, and onlookers that witnessed two Americans free-climb to the top of El Capitan in Yosemite National Park really wanted to explain to us non-climbers how big an achievement it was.

"It's 3,000 ft. That's almost three times as tall as the Empire State Building," one anchor from Al Jazeera said.

"They've had to contend with razor sharp edges and frigid winds," a BBC reporter said.

"The crux 15th pitch weighs in at 9A. Just to get there, there are five pitches, plus an 8B, plus an 8C, as well as a number of 8A plus sections," one EpicTV reporter said.

It's hard to put Tommy Caldwell and Kevin Jorgeson's climb up the Dawn Wall into words — and especially words non-climbers can understand.

"The Dawn Wall, which is the steepest, big wall maybe in the world."

That's Caldwell sometime before taking on the Dawn Wall with Jorgeson explaining what he and his climbing partner were getting into. (Video via Sender Films / "Valley Uprising")

Caldwell and Jorgeson planned for years before spending 19 days on the side of a mountain completing one of the hardest free climbs ever.

"Think about everything you've done in the last two and a half weeks. Every time you went to the store, every time you had dinner, they were on that cliff." (Video via NBC)

And just to add some professional perspective: Alex Honnold is a record-setting free-solo climber, meaning when he climbs, he does it fast and without any ropes. Caldwell and Jorgeson used ropes to keep from falling. But speaking to The New York Times, Honnold said, “What makes the Dawn Wall so special is that it’s almost not possible. ... The hardest pitches on the Dawn Wall are harder than I’ve ever climbed.” (Video via National Geographic)

From "almost not possible" to done. Afterward, Caldwell and Jorgeson got a shoutout from President Obama, who tweeted in part, "You remind us that anything is possible."

Others made the climb before them, but with ropes. Caldwell and Jorgeson are the first people to free-climb El Capitan.