How The L.A. Clippers Made Michael Jordan A Billionaire 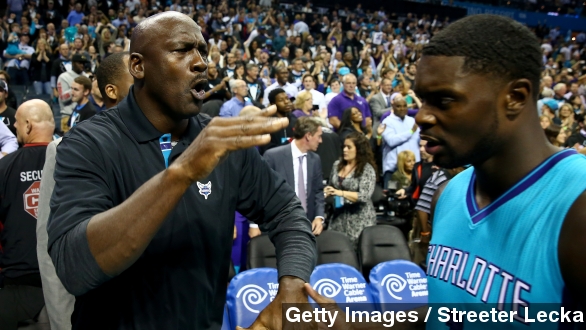 Michael Jordan is known as one of the greatest to ever play in the NBA. Now, he's got the NBA to thank for making him one of the richest.

Jordan is one of 290 newcomers on Forbes' annual billionaire list. His estimated net worth, according to Forbes, is about $1 billion — good for No. 1,741 on the list.

"Do we have any Clippers fans here?!" Steve Ballmer yelled.

And it’s Jordan’s ownership of the Charlotte Hornets that really put him into billionaire's club. Jordan’s been in Charlotte's front office since 2006, when they were still the Bobcats.

He took over as owner in 2010 and paid $275 million for 80 percent of the team. He's since increased that investment to 89.5 percent, a move that inched him into billionaire land. (Video via Charlotte Observer)

And take a look at this Business Insider graph after that Steve Ballmer bid. NBA franchises' values nearly doubled.

Forbes values the Hornets franchise at about $750 million now and Jordan's stake in the team at about $500 million.

Jordan is also making a good chunk of income from his deal with Nike, which earned the company about $2.25 billion in 2013, $90 million of which went straight to him.

NBA owners Jerry Reinsdorf of the Chicago Bulls and Leslie Alexander ($1.3 billion) of the Houston Rockets are also newcomers on the list ($1.6 billion).

This video includes images from Getty Images and Jeff / CC BY NC ND 2.0