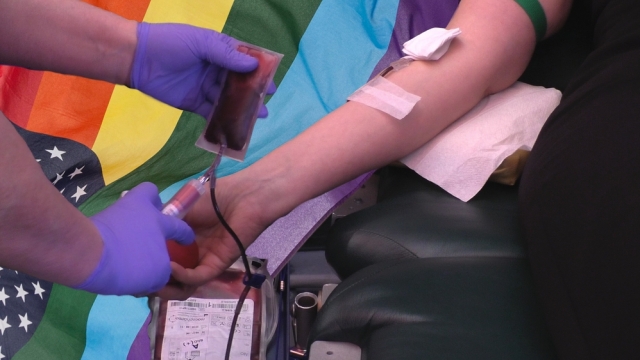 SMS
Why Does The Government Care About The Sex Lives Of Blood Donors?
By Cody LaGrow
By Cody LaGrow
October 26, 2016
A 21-year-old student filed a federal human rights complaint in Canada to challenge its blood deferral policy for men who have sex with men.
SHOW TRANSCRIPT

The Food and Drug Administration lifted a lifetime ban on MSM blood donors in 2015 — meaning men who have sex with men can donate blood — but only if they haven't had sex with another man for 365 days. Critics of the policy would rather see the blood donors screened by risk, not based on sexual orientation or gender identity.

Here's the thing about blood. It doesn't have a race, religion or sexual orientation. It's simply blood. A literal lifesaver. But in Canada, policies say, and we're paraphrasing here, blood can be too gay to donate. And that's what brings us to Toronto, home to Christopher Karas.

Karas is a 21-year-old paralegal student who filed a federal human rights complaint against the two entities that enforce the MSM blood deferral policy in Canada. Newsy's Cody LaGrow talked with him about his complaint.

NEWSY'S CODY LAGROW: How do you identify, and why are you doing this?

CHRISTOPHER KARAS: I'm a gay man. I want to give blood just like anyone else who would like to go and donate.

KARAS: Well, you know what's interesting is that they've made these policies that many of us believe are discriminatory and our government has even made a promise to change those policies and has said that it's disappointing.

LAGROW: Why do you think that is not enough?

KARAS: In the past, we've known it as an outright ban of men who've had sex with men. Also now, we're seeing this ban being used in a different way, but doing the very same thing the ban set out to do in the past.

Canadian Blood Services said the change from a five-year to one-year deferral policy was "based on scientific evidence and supported by input from stakeholders."

Karas and his legal representation, James Hill, are asking to see the science behind the numbers.

LAGROW: Where do you think these numbers come from?

JAMES HILL: There's nothing that actually supports the fact that there's a particularly five-year or one-year period. It's a number that perhaps speaks to fear, if you will. It's lip service.

Canadian Blood Services said it has the deferral policy for several reasons: a history of tainted blood in the '80s, the fact that other countries are doing it and the heavy hitter: Men who have sex with men account for the largest proportion of new HIV infections reported in Canada. That is the same in the United States.

But a 2015 study out of the Columbia Medical Review noted that the HIV rates among MSM blood donors are significantly lower than the general population of men who have sex with men.

The study also notes that advances in testing can detect if a person is infected with HIV faster — narrowing the window to less than 10 days. That's a lot shorter than a year.

Finally, it categorized deferral policies as "superficial" and "continuing the categorical association between gay sex and risky sex."

And just to show you how ridiculous the policy can get, let's take a look at autologous blood donation — or when patients donate their own blood for themselves prior to an operation. If you're an MSM donor, you can't even donate your own blood to yourself. Seriously.

KARAS: It further stigmatizes men who have sex with men. It's telling us that we're not equal. It is also putting a barrier to those who need the blood. And that's really important to set home. There are people who need this blood and who aren't getting it.

LAGROW: When you heard about the Pulse shooting in Orlando and you knew there were healthy gay men who wanted to donate blood, what was going through your mind?

KARAS: It really shook me to the core to see not only my community being hurt, but that we couldn't even do anything to help. The same is going to happen if there were to be any hate crime that were to take place here in Canada.

The Pulse nightclub shooting claimed 49 lives. And when Rep. Mike Quigley, D-Ill., first heard of the tragedy, he thought of the tragic irony he's been working on for years. Quigley represents Illinois' 5th Congressional District. He's a part of 115 U.S. House members pushing the FDA to end the MSM blood deferral policy in the U.S. for good.

LAGROW: What went through your mind when you watched the Pulse nightclub shooting unfold?

MIKE QUIGLEY:  I guess I saw it coming when I saw this tragedy unfold. I knew the gay community would step forward. This is a community that was targeted, the victims of this senseless rampage. Their best instincts to help and provide life-saving blood were turned away. It was extraordinarily hard to watch.

LAGROW: What would you rather see in lieu of a blood deferral policy?

QUIGLEY: The real solution is making sure that the best available testing procedures are available. The questionnaire that comes with the donation is improved and fits the concerns about behavior not orientation. How they sample the batches of blood that are donated. And if some of these policies are implemented, they may as well move to a no deferral policy as soon as possible.

In July of this year, the FDA announced it would officially re-evaluate its policy — and perhaps Canada is on the same track. Canadian Blood Services said it's working with the LGBTQ community and exploring the possibility of moving toward behavior-based screening.

LAGROW: What would you rather see instead of the deferral policy?

KARAS: I would rather see the ban eliminated, and I would rather see this evidence-based. I think it's important that we test the blood and we look at the behavior of the individuals rather than whom someone is sleeping with. It will be really empowering to be told you are able to go and donate and you could save someone's life today. That's something we're not being told today.

The agencies Karas filed a complaint against are still being investigated and have not responded to his complaint. To learn more about Karas' effort, updates are posted on his #EndMSMBloodBan page and on his Indiegogo fundraising campaign.