How Taylor Swift Went Platinum In Spite Of Industry Slump 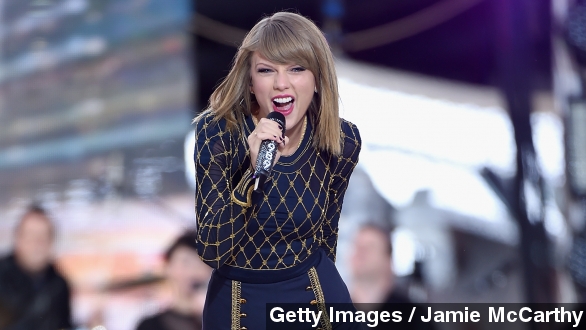 SMS
How Taylor Swift Went Platinum In Spite Of Industry Slump
By Erik Shute
By Erik Shute
November 5, 2014
Taylor Swift's first foray into pop music, "1989," reached the million mark in one week despite a dismal year in the music industry.
SHOW TRANSCRIPT

There are 1.287 million reasons why Taylor Swift's inaugural pop album is a success.

Nielsen SoundScan numbers out Wednesday show the Grammy-winning artist's new album "1989" is platinum after one week of sales. The sales aren't just impressive for Tay but also downright shocking after a dismal year in the music industry. (Video via Big Machine Records, LLC / Taylor Swift)

And from NPR: "You could call it a miracle. So far in 2014, only one album has sold more than a million copies: the soundtrack to the movie Frozen."

So what led to such a massive release?

Taylor Swift's social media campaigns encouraged fans to go out and buy a copy on iTunes or even a physical CD. She connected with more fans personally and inspired the #taylurking hashtag with her strategy of following fans on social media.

Also let's not forget Max Martin. The legendary pop producer behind huge stars like N'Sync and Britney Spears has a knack for supporting artists with catchy tracks. He produced seven out of the 13 tracks on "1989." (Video via Trans Continental Records, Inc. / N'Sync, Zomba Recording LLC / Britney Spears)

Another possible factor in the album's success: shedding Spotify — and dismissing any streaming service, for that matter.

During "1989"'s first week of sales, Swift's camp decided to pull all her music except for one song from the Swedish streaming service without warning. (Video via ABC)

Earlier this year the singer-songwriter penned an op-ed in The Wall Street Journal and criticized streaming services for devaluing music and artists' earnings from it.

Even though Taylor's loyal fans have brought the artist to platinum status again, Money thinks Swift's fighting a "losing battle," claiming her boycott can't last forever. An entertainment analyst told the magazine, "If you say 'hey I don't want to be on streaming because I sort of object to the way it tastes,' you're kind of ignoring where the whole audience is."

A report out this week shows Spotify's payouts reward artists more than iTunes does in some sectors. In Europe, Spotify's royalty payments have Kobalt Music Group artists earning 13 percent more than they do from Apple.

As for Taylor's new album, we'll likely hear more about it a year from now. "1989" missed the Sept. 30 cutoff for the Grammys this year, but analysts and fans expect the platinum album to receive a few nods in 2016.