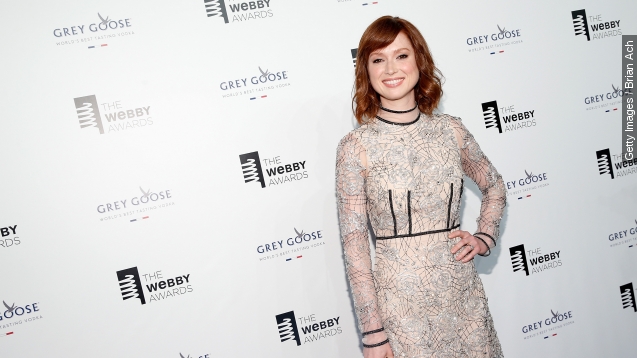 Ellie Kemper has revealed the real-life inspiration behind her character, Kimmy Schmidt, in her new Netflix series.

If you've never seen "Unbreakable Kimmy Schmidt," Kemper stars as an extremely optimistic doomsday cult survivor, who was rescued from an underground bunker in Indiana after 15 years of captivity.

"Oh, I'm very normal; I've had everything normal happen to me," her character says.

As a result, the always upbeat woman is stuck in the '90s while trying to live in present-day New York.

And while her character is sometimes overly enthusiastic and, quite literally, always looking on the bright side of things, she actually found inspiration for her character after reading two real-life survival stories.

In a recent interview for The Wrap, Kemper said, "I read Elizabeth Smart's memoir, and every night before she would go to bed, she would think about what she was grateful for that day — and she was in the depths of hell."

Smart's memoir, "My Story," describes her 2002 abduction. She was kidnapped at 14 years old and rescued nine months later after her captor, Brian David Mitchell, had been recognized while walking with two women in a Salt Lake City suburb.

Kemper told Deadline she also prepared for the role by reading Michelle Knight's book, "Finding Me," which recounts the more recent rescue of Knight and two other women held captive in Cleveland for almost a decade.

In a March interview with E!, Kemper had this to say about her character Kimmy: "Bad things will happen. That's what life is, but the ability to overcome that and surmount it and let those experiences define you is, I think, what makes [Kimmy] so inspiring."

So while Kemper says it was important to have the enthusiasm of a girl trapped in an adult's body, she also wanted to be prepared for the strength she would need to convey on screen.

She seems to have nailed the part. The first season of the series has a 94 percent critics approval rating on Rotten Tomatoes. And though Netflix keeps the ratings of its original programming a secret, Variety exclusively reported that Luth Research estimates the new series premiered to a larger audience than season 3 of "House of Cards."

Even real escapees of pre- and post-apocalyptic cults have pointed out that Schmidt's actions in the show are, at times, spot-on. In one Vulture op-ed, a writer who escaped from the Children of God cult said, "Growing up in a cult gives you an abnormal zest for life, and Kimmy Schmidt exuberates this confidence fittingly."