How Super Bowl Advertisers Use Puppies To Profit 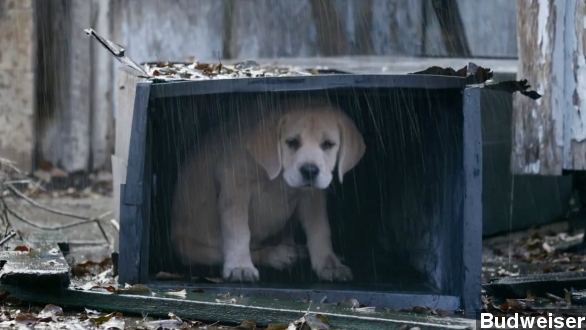 SMS
How Super Bowl Advertisers Use Puppies To Profit
By Matt Moreno
By Matt Moreno
January 28, 2015
Budweiser, GoDaddy and Animal Planet use puppies to promote their brands and products. Why is this Super Bowl staple so effective for advertisers?
SHOW TRANSCRIPT

For advertisers, just getting your product in front of viewers is already a challenge. Standing out to viewers during one of the biggest sporting events of the year that's got all the glitz and glam? Now that is something else.

There will be no shortage of puppies this year before, during and after the Super Bowl. (Video via GoDaddy | Budweiser)

It's a move that's become somewhat predictable from advertisers.

"Look at this adorable dog that could make your battery brand more appealing to high-earning mothers aged 35 to 44," the Newcastle Brown Ale advertisement says.

But that doesn't mean the media will stop talking about those ads. There's no denying: They work and for fairly simple reasons.

"Two words: emotional branding," CMSWire writes. "Identified by Forrester [Research] as 'the most important driver of customer loyalty' when it comes to customer experience, making connections with customers based on emotion is where it’s at in 2015."

USA Today quotes a GoDaddy rep, who says, "puppies hit an emotional chord," and a Budweiser rep says the use of animals "help universalize our storytelling."

Those puppy ads are now more visible than ever. Anheuser-Busch, the exclusive beer advertiser during the Super Bowl and one of the NFL's biggest sponsors, gained plenty of praise for its puppy ad last year, too.

And you can't forget Animal Planet's "Puppy Bowl," which is gaining in popularity each year. While not exactly an advertisement, the "Puppy Bowl" still brought in 13.5 million viewers over a 12-hour span on Super Bowl Sunday. That's up about 24 percent from the year before.

So now, next time you see a puppy, you may also think about grabbing a cold beer, creating a website or checking out what animals are doing on TV.