How Sony Hopes To Make Any Glasses 'Smart' 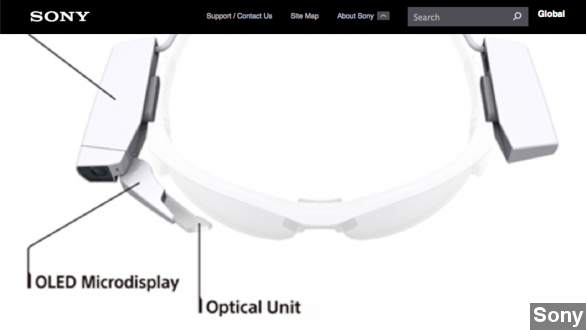 SMS
How Sony Hopes To Make Any Glasses 'Smart'
By Evan Thomas
By Evan Thomas
December 17, 2014
Sony's glasses module attaches to the temples of various eye- and sunglasses to add a display and wireless connectivity.
SHOW TRANSCRIPT

Sony is preparing to enter the smart glasses space, but, unlike Google Glass, you can bring your own eyewear this time.

The add-on will attach to an existing pair of glasses or goggles. The two arms of the device reach around the back of the wearer's head to connect to the temples. Sony appears to be aiming the headset at sports and athletics usage.

It will feature an ARM processor like those found in Android wearables, plus the standard range of Bluetooth and Wi-Fi radios. It can be used on its own or paired with a smartphone for more communications or computing muscle.

Sony hasn't said what the headset might cost if it makes it to market. A writer at TechCrunch expects that will be an important metric for success.

"Google Glass has failed to grab mainstream attention and having a high price tag is certainly part of its problem. The other part being the inherent geeky creepiness of sporting a face computer in public."

Sony might avoid that last part, though. GigaOM spoke with a Sony rep who said Sony opted to omit the camera from the first version — despite what the prototype images show.

"The camera was left out for size and weight reasons, he said. That is probably a bonus from a privacy point of view, though it also makes the unit useless for life-logging or augmented reality."

It looks like consumers who find that important will have other options. The Wall Street Journal reports Google is preparing a new version of its Glass headset with speedier Intel processors.

And even Snapchat — yes, Snapchat — is said to be eyeing the smart glasses market.

Sony, meanwhile, will be showing off its new headset at the Consumer Electronics Show in January.