The Delicate Science Of Reading Ancient Scrolls That Can't Be Opened 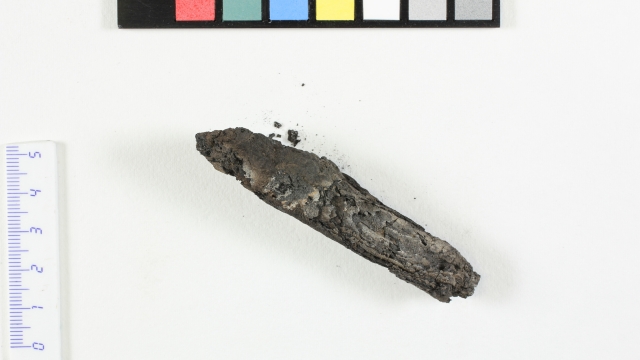 How do you read something that's ancient, burned beyond comprehension and too fragile to even touch?

The Ein Gedi scroll is an artifact dug out of a Jewish synagogue that was destroyed in A.D. 600. It looks like a lump of coal and will probably never be opened, but we now know it contains the beginning of the book of Leviticus — maybe the oldest example in Hebrew outside of the Dead Sea scrolls.

SEE MORE: Ancient Sites Are Being Digitally Preserved Thanks To New Technology

We know that because researchers scanned the scroll with a technique called X-ray microtomography — like a medical CT scan, but more powerful.

It looks like a medical CT at first, too. Researchers reconstructed the rolled shape and determined its texture based on how the X-rays reflected from the metal content of the inks. They were able to digitally unroll the scroll and read from it, no touching required.

The same X-ray technique worked on papyrus scrolls from Herculaneum, which were buried when Mt. Vesuvius erupted. These were even harder to read, because their carbon-based inks don't reflect X-rays as well as metal inks.

Scientists borrowed the X-ray beam from one of Europe's particle accelerators to get enough power.

X-rays have even been used to digitally unroll scrolls of silver and read their inscriptions.

The tightly packed pages of ancient books can be just as difficult to open up safely. To look through these, scientists are developing terahertz cameras, which capture the light between microwave and infrared frequencies.

They're precise enough to show where one page ends and the next begins — and to read the letters on each.