How Sanders' Presidential Campaign Is And Isn't Like Obama's 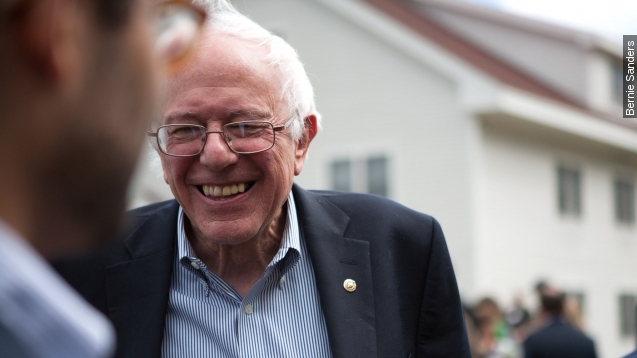 Hillary Clinton has found herself in familiar territory in her second White House run: a presumptive nominee, polling well against Republicans. And just like in 2007, a senator is running to her left and gaining momentum.

But Bernie Sanders isn't Barack Obama, and their rapid surges in popularity are different for a lot of reasons, despite a few similarities.

Both the Obama and Sanders campaigns focused on grassroots fundraising. And it's definitely working for Sanders: his campaign touts 284,000 donors with an average contribution of just about $33. President Obama had about 180,000 donors at this point in 2007.

Both Sanders and Obama get the people out for their rallies. Since announcing his run, Bernie Sanders has had two rallies with more than 10,000 in the crowd. In 2007, then-Senator Obama drew at least three crowds of 20,000. (Video via Bernie Sanders)

And among young voters, they're both very popular. One possible reason: Sanders has gone on the record for a free public college education at a time when the cost of college continues to rise. (Video via Bernie Sanders)

But that's kind of where the similarities end.

Unlike President Obama, Sanders doesn't poll well with an important Democratic voting block: minorities. In a recent poll by NBC and The Wall Street Journal, Sanders received only 3 percent of support from non-white voters, despite what he says is a good record on race. (Video via Bernie Sanders)

"I have a long history in fighting for civil rights. I understand that many people in the African-American community may not understand that," Sanders told ABC's George Stephanopoulos. (Video via ABC News)

The biggest difference between the two is probably the breadth of their campaign operations. In Iowa, maybe the most important caucus state, the Sanders campaign has 10 offices. At this point in 2007, President Obama had 25. (Video via Bernie Sanders)

A more fitting comparison for Sanders might be Howard Dean. Both of them hail from Vermont, both fired up the progressive wing of the Democratic party and caught momentum fast at the beginning of the election. Unfortunately for Dean, this happened. (Video via Democratic National Convention, CNN)

Anyway, this time around it doesn't seem like Hillary Clinton is all that surprised by a left-wing opponent. (Video via MSNBC)

"Of course we're worried about him. This is an election and he is doing well and she'll have to make her case. We knew this was going to happen," Clinton's communication director Jennifer Palmieri told Morning Joe.

This video includes images from The Other Paper / CC BY-SA 2.0.