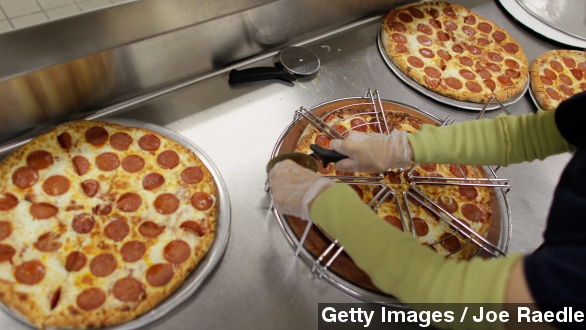 SMS
How Pizza Derails Kids' Diets
By Katherine Biek
By Katherine Biek
January 19, 2015
When children eat pizza, it accounts for 20 percent of their daily calorie intake, according to a new study.
SHOW TRANSCRIPT

All right, kids. Step away from the pizza.

A new study says children in the U.S. consume more calories, saturated fat and salt on the days they eat pizza compared to the days they don't. Obviously.

And when eating a slice, pizza can account for up to 20 percent of a child's daily calories.

"Parents should aim to curb pizza consumption, particularly as a snack where it was shown to have the largest adverse impact on children's [calorie] intake," the study's co-author Lisa Powel said, according to LiveScience.

To come to this conclusion, researchers looked at information from U.S. National Health and Nutrition Examination surveys between 2003 and 2010. In these surveys, parents reported what their children ate in the last 24 hours.

That's concerning, since consuming so many calories and sodium can contribute to serious health issues like Type 2 diabetes and obesity.

This new information builds on a 2010 finding: that pizza was the second-highest source of calories for children. Grain-based desserts, like cake, barely beat pizza out for first place.

And while some parents might think the tomato sauce makes pizza a healthy meal choice, ABC explains how it stacks up against other types of fast food.

"Just take a look at how two slices of pizza compares to processed nuggets and french fries or a hamburger meal. Nearly the same number of calories," ABC reporter Reena Ninan said.

But pizza chains say they're stepping up with ways to make their offerings healthier.

Domino's created a line of pizzas for schools that include whole-wheat crust, light cheese and sauces with less sodium.

And just last year, Pizza Hut introduced the Skinny Slice to its menu. By using a thinner crust and less cheese, slices have about 80 fewer calories than a slice of its regular pizza.

Not surprisingly, the study didn't go over well with parents who say grabbing a pizza for dinner is convenient.

Father Scott Kelly told NBC: "At the end of a 13- or 14-hour day, my wife and I would rather spend time with our kids than spend time cooking and cleaning. The other night, we had pizza because I wanted to be there for my son's lacrosse practice."

Instead of cutting pizza out of kids' diets completely, dietitians recommend eating pizza with a whole-wheat crust, less sauce and more vegetables. Eating pizza just once a week might also help. (Video via Allrecipes)

The study was published Monday in the journal Pediatrics.