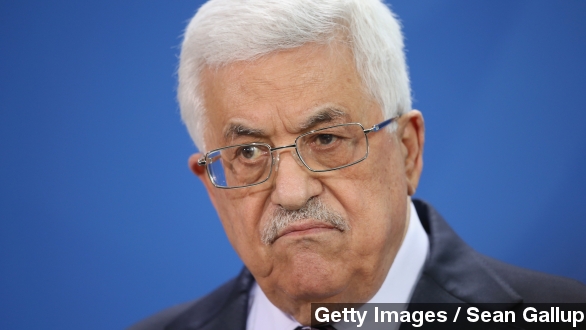 SMS
How Palestinian Leaders' Latest Move Could Backfire
By Jasmine Bailey
By Jasmine Bailey
December 31, 2014
Palestinian leaders say joining the International Criminal Court will provide a legal route to ending the occupation, but it won't be that simple.
SHOW TRANSCRIPT

Just one day after the United Nations rejected its statehood bid, the Palestinian Authority has asked to join the International Criminal Court.

The ICC, based in The Hague, is responsible for trying war crimes, including crimes against humanity and genocide.

If the PA joins the court, that would mean — theoretically — that Palestinians could push for war crimes charges against Israel, which is reportedly a top priority.

PA President Mahmoud Abbas held a televised ceremony Wednesday where he signed the ICC's Rome Statute, seen as a first step toward membership, as well as 19 other international agreements.

Israeli Prime Minister Benjamin Netanyahu, who has called Israel's military “the most moral army in the world,” called the move a "gimmick" and is vowing retaliation.

Tuesday's Palestinian statehood bid was blocked by the U.N. Security Council — a result that was expected going in.

The resolution would have set a 2017 deadline for the end of Israel's occupation. Both Israel and the U.S. claimed that would have sabotaged any chance for a peace agreement.

But without statehood and with U.S.-brokered peace talks collapsing earlier this year, Palestinian leaders say their only remaining option is to sign as many international agreements as possible.

“The repeated request for us to wait and wait and wait … must understand that such requests are not viable,” said PA delegate Riyad Mansour.

But joining the ICC might actually do the exact opposite of what Palestinian leaders want. Analysts have been quick to point out that Israel could just as easily file a war crimes lawsuit of its own.

Over the summer, the PA's own delegate to the U.N. admitted missiles fired by Hamas into Israel constitute war crimes. That's the position of most international organizations as well.

And the PA and Hamas are inextricably linked. They spent much of the last decade as rivals, but set aside their differences to form a unity government earlier this year.

Netanyahu made the same point in his response Wednesday, saying it's Palestinian leaders that should fear the ICC.

The move also opens Abbas's government up to sanctions from the U.S. A Palestinian researcher tells The New York Times the economic consequences of joining the court could mark "the beginning of the end of the P.A."

The final decision whether to allow the PA to join the court rests with U.N. Secretary General Ban Ki-moon. If he accepts, we could see the beginnings of a lengthy legal battle sometime in the first half of 2015.