How Oil Could Have Helped Bring U.S. And Cuba To Negotiate 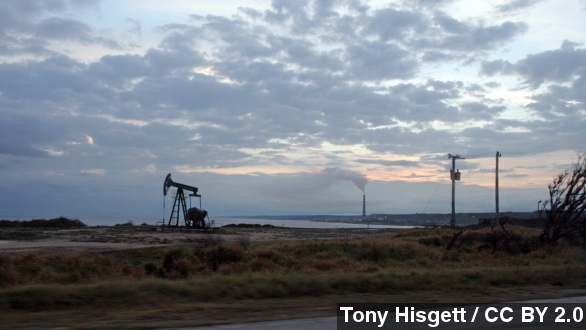 SMS
How Oil Could Have Helped Bring U.S. And Cuba To Negotiate
By Bram Sable-Smith
By Bram Sable-Smith
December 20, 2014
The thaw in U.S.-Cuban relations began with discussions of a prison exchange, but oil might also be playing a role in bringing the sides to the table.
SHOW TRANSCRIPT

The driving force behind the thaw in U.S.-Cuban relations this week seemed to come down to a prisoner exchange involving a U.S. contractor named Alan Gross.

"Over many months, my administration has held discussions with the Cuban government about Alan's case, and other aspects of our relationship," President Obama said at a news conference.

But there appears to be another factor pulling both countries to the negotiating table: oil.

The Cuban economy relies on about $3 billion a year in oil subsidies from the Venezuelan government. In return, the Cuban government provides thousands of doctors, teachers and military advisers to Venezuela.

That relationship has been put in jeopardy by the recent economic woes in Venezuela caused by high inflation, U.S. sanctions and now the plummeting price of oil that accounts for 96 percent of the country's exports.

In short, the Venezuelan economy is on the brink of collapse and that's bad news for Cuba, which relies on the special relationship with Venezuela as an economic life line. (Video via RT)

The head of the Latin American energy program at the University of Texas said this to the Miami Herald, "Cuba faces the same risk today that it faced after the collapse of the Soviet Union in the early 1990s when it had all its eggs in the Soviet basket."

Opening Cuba to investment from the U.S. will help the country hedge its dependence on Venezuelan oil subsidies. And oil could be pushing the U.S. into negotiations as well.

That's because an untapped oil basin just off of Cuba's coast in the Gulf of Mexico could hold at least 5 billion barrels of oil. A renewed relationship with Cuba would allow American oil companies to begin exploring the basin. (Video via BBC)

But not everyone is bullish about Cuba's potential as the next frontier in petroleum exploration.

We won't know what the partnership between the U.S. and Cuban oil industries will look like for some time. The White House didn't release any real details on that in its announcement this week.

This video includes images from Getty Images and Tony Hisgett / CC BY 2.0.