How Much Does Bridgegate Really Affect Christie? 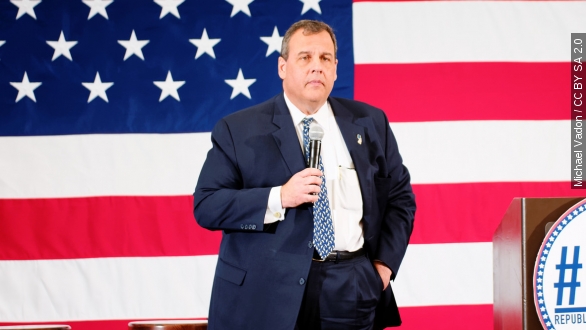 Inside a federal courthouse — not where New Jersey Gov. Chris Christie wants to start his presidential campaign. That is, if he starts a bid for the White House at all.

"Mr. Christie knew of the lane closures while they were occurring, and evidence exists to establish that," attorney Alan Zegas said Friday.

The aides are accused of intentionally clogging traffic by shutting down two of three eastbound lanes without notifying the public or emergency services. The move caused massive delays and gridlocked traffic.

Federal prosecutors say the collaboration was in response to Fort Lee's Mayor Mark Sokolich, a Democrat, not endorsing Christie during his 2013 gubernatorial election bid. Christie's potential involvement in the alleged scheme is a bit murky though. (Video via CNN)

"Federal officials tell NBC News that after nine months, investigators have concluded there is no evidence Gov. Christie had advance knowledge of any politically motivated scheme to shut down lanes on the George Washington Bridge," NBC reported in September of 2014.

For now, Christie has avoided a federal indictment and has always maintained he knew nothing about the lane closures. Still, Christie's name and reputation have already taken a big hit.

"All these big-time Republican donors have just been begging Chris Christie to get into this race, but he crushed their hopes with one final no," CBS correspondent Jan Crawford reported.

That's from 2011 when many Republicans hoped he'd jumped into the 2012 bid for president. When he didn't, his popularity was expected to carry over to 2016.

Wildstein is expected to testify Christie somewhat knew about the bridge closure plan. A writer for NJ.com says, "When ... Wildstein spills his guts, Christie will then have to tell the voters why Wildstein is wrong while testifying under oath about Christie's knowledge of the closures. If he can talk his way out of that one, he deserves to be president."

And now, the lane closure scandal is taking a toll on Christie's 2016 outlook — at least in the media. Opinion has changed from 'Christie is a favorite' to 'does Christie have a chance?' The New York Post went as far to call him a "fading GOP star."

Recent Quinnipiac University polling finds his approval rating at a low, with 56 percent of New Jersey voters disapproving of his performance as governor.

Then again, the national stage is different, and 2016 is a while from now, politically speaking. And Christie sounds confident he can bounce back in time —if he needs to, of course.

"Let me ask you about Mrs. Clinton's campaign. Can you beat her, Chris Christie?" Hugh Hewitt asked.

Christie has not officially announced a bid for the 2016 presidential race.