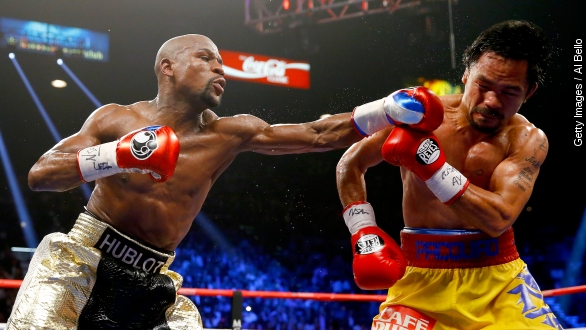 It was billed as the "Fight of the Century" and it lived up to the name both in the ring and in the cable companies' bank accounts. Floyd Mayweather Jr. defeated Manny Pacquiao by unanimous decision Saturday night in Las Vegas. The fight featured the boxers' bests — Pacquiao's vicious punch combos and Mayweather's elusive defense.

But it was Mayweather whose best was best. Pacquiao, the more offensive-minded boxer, landed just 19% of his punches while Mayweather hit about 34%.

"It's a given that Mayweather gives you the first two or three rounds just to see where you're at," Jenaro Diaz said.

That's not how things fell for Pacquiao though.

All three judges unanimously scored Mayweather as the winner in four of the first six rounds, important for the defensive boxer who's known to take over a fight in the later portions.

A writer for the New York Daily News said, "It was a Mayweather type of fight, in which he dictated the pace with his superior ring acumen and boxing IQ."

For Pacquiao's sake, his camp claims he boxed with an injured shoulder and was denied an anti-inflammatory shot just before the fight.

But how does this fight compare in greatest of all-time? Monetarily, it's paramount.

Tickets to match ran for thousands of dollars and, CBS reports, ring-side seats fetched up to six-figures. That's probably why they were oh so star-studded.

And the hefty $100 price tag to watch the fight on pay-per-view apparently wasn't enough to turn people away. The match was delayed about 30 minutes when cable providers were overwhelmed by customers' demand for the fight.

In all, Deadline reports the fight brought in an estimated $400 million for HBO and Showtime, making it one of, if not the most, lucrative fight ever for the networks.

At 48-0, Mayweather is the undisputed welterweight champion of the world and proved why he's considered one of boxing's best of all-time.

Mayweather says he'll box just one more time before hanging up the gloves and retiring.

This video contains images from Getty Images and music from Kevin MacLeod / CC BY 3.0​.