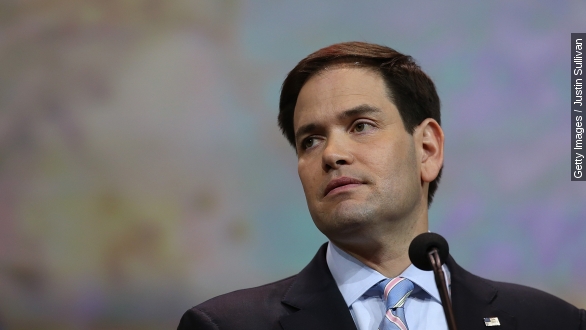 SMS
How Marco Rubio's 2016 Run Could Spoil Jeb Bush's Campaign
By Ben Levin
By Ben Levin
April 13, 2015
Marco Rubio is running for president, which could be a problem for Jeb Bush. The two share a home state, donors and strong ties to Latino voters.
SHOW TRANSCRIPT

Hillary Clinton is officially in the presidential race, but Republicans aren't backing down: Marco Rubio has announced his entry into the Republican primary.

"Inspired by the promise of our future, I announce my candidacy for president of the United States," Rubio said.

And while the junior Florida senator is entering a crowded field, there's one candidate in particular who might give Rubio some trouble. (Video via CBS)

That candidate's name is Jeb Bush, and he's the well-financed and popular front-runner for the Republican nomination.

Bush told the Republican National Convention in 2012: "My grandfather and my father have been incredible role models for me and served our country honorable. And my brother? Well, I love my brother."

The problem? He and Rubio are similar: They're both from Florida, they both have strong ties to Latino voters, and they both raise a lot of money from similar sources.

But whereas Jeb Bush is the son and brother of former presidents and has been known nationally for years, Rubio is fresh: 18 years younger with strong ties to conservative groups and a long history of being called the "Republican Obama."

And if Rubio is like Obama in 2008, that puts Jeb Bush in the "2008 Hillary Clinton" slot as the older, more familiar candidate — not a good place to be.

"Well, this is not the party I planned, but I sure like the company," Clinton said.

Still, Rubio has a lot of work to do: At this point in the 2008 cycle, Obama was polling in the mid 20's. Rubio enters the race at about 7 percent.

And there's another problem: Among Scott Walker, Chris Christie, Rand Paul, Ted Cruz, Rick Perry, Rick Santorum, Ben Carson, Bobby Jindal, and of course Jeb Bush, there are a lot of Republicans in this race — which'll make it hard for Rubio to position himself as the "Bush alternative" he wants to be. (Video via MSNBC)

It's a tough position for Rubio, who was a close ally of Bush during their years in Florida politics. That alliance has formally ended, though, as both candidates ramp up for what could be a long campaign.