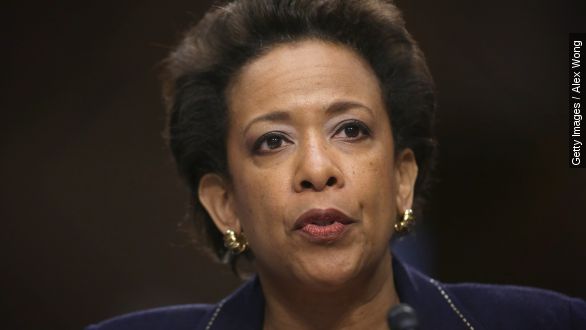 “Call Loretta Lynch for a vote. Get her confirmed. Let her do her job … This is embarrassing, a process like this,” President Obama said.

If confirmed, Loretta Lynch will be first black woman to head the Justice Department in the nation’s history. But it’s not so much a matter of if, but when.

Since President Obama announced Lynch was his pick to replace Eric Holder as attorney general on November 8, a whopping 161 days have passed. (Video via The White House)

She's left in limbo while the Senate debates an unrelated matter. Senate Majority Leader Mitch McConnell says he won’t bring Lynch to a vote, until the human trafficking bill is passed.

“The bill should not be derailed by such a fight.”

But that’s a no-go for Democrats who object to abortions provisions included in the measure.

“We’ve put up with this for too long,” Minority Leader Harry Reid told MSNBC.

Meanwhile, Lynch waits. And the longer she waits, the more history she makes.

To give you an idea: the previous five attorneys general waited on average 31 days to be confirmed after  their nominations were received in the Senate.

This next bit of math comes from FiveThirtyEight. Having sailed past Gina McCarthy’s 133-day wait to become EPA chief in 2013, Lynch is creeping up on former U.N. ambassador Richard Holbrooke's 176-day confirmation wait.

Of course, she’s nowhere near the record set by Attorney General Edwin Meese's confirmation process. He was confirmed in 1985, 13 months after President Reagan nominated him. (Video via C-SPAN)

But back to Lynch. Again, it’s not a matter so much of if, but when the Senate will confirm her. The upper chamber hasn’t had a problem doing so in the past, confirming her twice before as U.S. Attorney for the Eastern District of New York — once in 2000 and again in 2010 for the same job.

This video includes images from Getty Images, the Environmental Protection Agency and the U.S. Department of State.