How Intel Aims To Fix Diversity In Tech 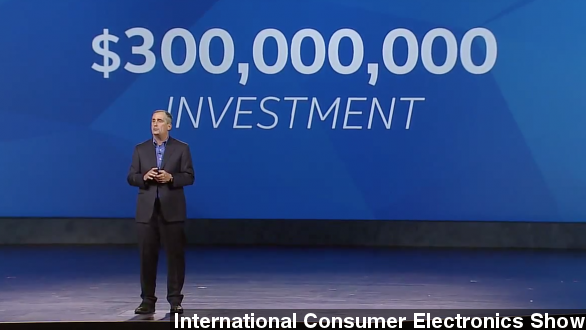 SMS
How Intel Aims To Fix Diversity In Tech
By Danny Matteson
By Danny Matteson
January 7, 2015
At his CES keynote Tuesday, Intel CEO Brian Krzanich announced an initiative aimed at increasing diversity in technology within the next five years.
SHOW TRANSCRIPT

It's a criticism tech companies have heard all too often in 2014 — that women and minorities make up too small a proportion of their overall workforces.

"Women make up less than 20 percent of the staff. Sixteen percent on average at Apple, Facebook, Google and Twitter. The breakdown by race? Even more lopsided," a Bloomberg commentator said.

But on Tuesday, one major tech company pledged to make some changes. (Video via Intel)

During his keynote speech at the International Consumer Electronics Show in Las Vegas, Intel CEO Brian Krzanich announced an initiative aimed at increasing diversity in technology within the next five years. (Video via Intel)

"I'm announcing the creation of the Diversity in Technology Initiative," Krzanich said.

In a press release, Intel specifies the plan aims to increase employment of women and minorities to "full representation" by 2020. It also pledges $300 million to "help build a pipeline of female and under-represented engineers and computer scientists."

The announcement comes after a flurry of stories related to diversity in technology broke in 2014: Microsoft CEO Satya Nadella's bumbling statement that women shouldn't ask for a raise, threats lobbed at female gaming journalists and developers amid the #Gamergate movement, and a string of diversity reports from major tech companies showing their employees are still predominantly white and male.

Intel's own diversity report from 2013 shows the company is 76 percent male and 57 percent white overall. Forty-five percent of its employees are white males.

As VentureBeat notes, Intel's announcement comes after it faced criticism for pulling advertising under pressure from #Gamergate supporters.

But according to Krzanich, the initiative isn't about PR. "This isn't just good business. This is the right thing to do."