How IBM Might Handle Your Health Data In The Future 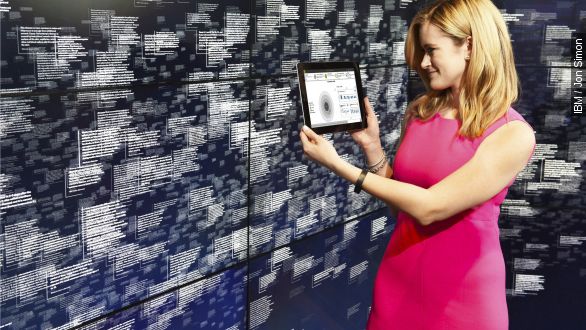 SMS
How IBM Might Handle Your Health Data In The Future
By Jake Godin
By Jake Godin
April 14, 2015
IBM announced Tuesday that it's jumping into the world of health-related data, partnering with numerous companies and launching a new Watson service.
SHOW TRANSCRIPT

IBM wants to take health care data into the future.

In a flurry of press releases, IBM announced three big moves Tuesday, all of which paint the technology company as one that's getting more serious about health data.

Remember Watson, of supercomputer-that-beat-everyone-at-"Jeopardy" fame? Well, it turns out it does a lot more than win game shows.

Using the supercomputing power of Watson, IBM wants to take vast amounts of patient health care data, strip it of any personal information and feed it to those who can use it, such as doctors and researchers. (Video via IBM)

And when we say vast, we mean vast. At least according to IBM, which says an average person generates more than 1 million gigabytes of health-related data in their lifetime.

So where's IBM going to get all of that data?

"Those devices are gonna start to capture enormous amounts of information about us as humans. They have capabilities that are going to fuel a data explosion," said IBM Watson Senior Senior Vice President Mike Rhodin.

For now, IBM is partnering with Apple, Medtronic and Johnson & Johnson — three companies it'll use as either data sources or places to utilize the data it collects. IBM's Senior VP hinted to Fortune there could be more to come.

To round off its slew of health care news, IBM announced it'll be acquiring two health-related companies as well — Phytel and Explorys. Both offer IBM avenues for getting closer to hospitals. (Video via Phytel)

As Fortune notes, there's money to be made in catering tech to the medical sector. The health care industry spent $60 billion on information technology services in 2014.

This video includes images from IBM and music from macrocosm / CC BY 3.0.